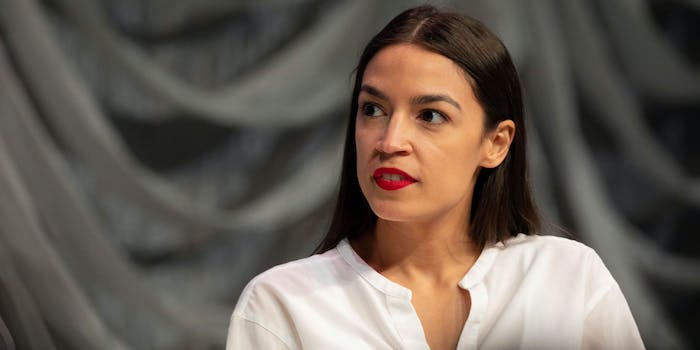 Cop fired after implying Ocasio-Cortez should be shot (updated)

He wrote she 'needs a round'—and he didn't mean drinks.

Update 8:18am CT, July 23: Ripoli has been fired along with a colleague, Gretna Police Chief Arthur Lawson declared on Monday, according to BuzzFeed. The other cop is Officer Angelo Varisco, who Liked his post. Lawson said the incident was an “embarrassment” to their department and said they’ve reached out to Facebook to inquire if any other department members have engaged with the post.

“Whether it was a joke or not, it was improper,” he said at a press conference, according to BuzzFeed. “To insinuate a violent act against an individual, an elected official, against a seeded U.S. congressperson… It’s completely irresponsible and intolerable.”

He added that Lawson did not have a disciplinary record in the past but the department has a “zero-tolerance” policy.

A Louisiana cop has come under fire for suggesting in a Facebook post that Rep. Alexandria Ocasio-Cortez (D-N.Y.) should be fired upon, NOLA.com reports.

Charlie Rispoli of the Gretna City Police Department in Gretna, Louisiana, shared an article about Ocasio-Cortez last week and wrote, “This vile idiot needs a round…….and I don’t mean the kind she used to serve.”

The second clause of his threat was seemingly a reference to her past employment as a bartender, which she has openly talked about in an effort to dismantle the stigma around “unskilled labor.”

On his own post, Rispoli commented, “It must be hard living with the IQ of a Chiclet,” according to a screenshot shared by NOLA.com.

The Facebook post was reportedly made on Thursday afternoon but was not available on Monday morning when the Daily Dot conducted a search. According to NOLA.com, the post was taken down by Friday, and Rispoli’s account removed by Saturday.

The commentary came attached with an article titled, “Ocasio-Cortez on the Budget: ‘We Pay Soldiers Too Much’” on tatersgonnatate.com. Fact-checking website Snopes.com has flagged the quote in the headline article as false. The website where the article appears is brimming with similar attacks on other Democratic politicians of color, including former President Barrack Obama, and Reps. Rashida Tlaib (D-Mich.) and Ilhan Omar (D-Minn.).

The articles on the website, which make numerous false claims, have thousands of Facebook shares, as indicated by a widget under the headlines. The articles are almost entirely written by one author.

Chief Arthur Lawson has said Rispoli’s post was “disturbing,” according to NOLA.com.

“I will tell you this: This will not go unchecked,” Lawson reportedly said. “I’m not going to take this lightly and this will be dealt with on our end. It’s not something we want someone that’s affiliated with our department to make these types of statements. That’s not going to happen.”

He added that one might agree or disagree with politicians’ messages but “this certainly is not the type of thing that a public servant should be posting.”

The online attack, which Lawson has said doesn’t necessarily constitute a direct threat but violates the department’s social media guidelines, came at the heels of a week riddled with verbal attacks by President Donald Trump against four congresswomen of color including Ocasio-Cortez, Omar, Tlaib, and Rep. Ayanna Pressley (D-Mass.) he told to “go back” to a country. Of them, Omar was particularly singled out at a Trump rally in North Carolina with thousands of supporters chanting, “Send her back.”

There’s an internal investigation going on about Rispoli’s comments, WDSU News reported on Sunday evening. According to the news website, Rispoli just completed a training that addresses racial bias. A June expose revealed police officers across the country routinely post racist and discriminatory posts on their social media.