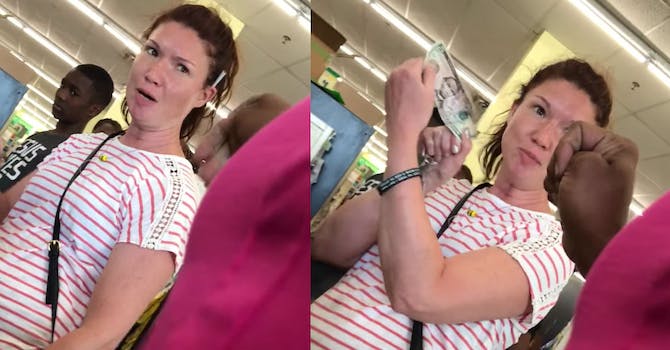 ‘I hope Trump deports you’: Woman goes on racist rant to Spanish speakers at a store

She also flipped a bundle of dollar notes at Johanny Santana saying she was paying with 'legal' money not 'drug money.'

A woman at a Pennsylvania store was caught on video making racist comments to a Puerto Rican woman and mocking her for speaking Spanish.

Johanny Santana from Abington, Pennsylvania, recorded the encounter and shared it to Facebook on June 30.

Santana told NBC Philadelphia that the white woman in the video started cursing when they were waiting in line and overheard a grandfather and grandson speak in Spanish.

“The boy comes back and asks another question [to the cashier] and that’s when the woman, who was next to me, started cursing,” she said.

The video shows the woman arguing with Santana, who also traded some of her own insults.

“You problem for speaking Spanish?” Santana asks at the beginning of the video.

“Umm can you stop talking to me?” says the woman.

“No you not talk for puta because puta is no good,” Santana responds.

A few moments later, when Santana tries to say something else, the woman laughs, and tells her, “I was born here, you don’t belong here.”

“Go back to your country,” the woman says, while Santana repeats, “I don’t care.”

“We want your fucking money back, you’re illegal,” the woman continues. “You should be deported.”

“I hope Trump deports you,” the woman says a few seconds later, while Santana continues to argue back.

She then brandishes a bundle of dollar notes and says, “Legal money, not drug money.”

Santana told NBC that she regretted cursing back at the woman but also felt “powerless because I didn’t speak English well enough to be able to properly respond to her.”

The story was initially reported by NBC Philadelphia on July 10, but the video garnered more traction on Sunday after a Twitter post by user @_SJPeace_.

"I pay with cash. Legal money. Not drug money"

Does she realize that drugs are typically bought with cash? Of course not, because she's ignorant and racist. Can we find out where she works please?

What bothers me the most is that no one speaks up for this woman!

This is how #Trump thinks he is making America Great Again

Increased attention to the video follows a week of tense conversations of race. President Donald Trump went on a stream of Twitter attacks against four congresswomen of color, telling them to “go back” to an unspecified country. All four congresswomen—Reps. Alexandria Ocasio-Cortez (D-N.Y.), Ilhan Omar (D-Minn.), Ayanna Pressley (D-Mass.), and Rashida Tlaib (D-Mich.) are U.S. citizens.