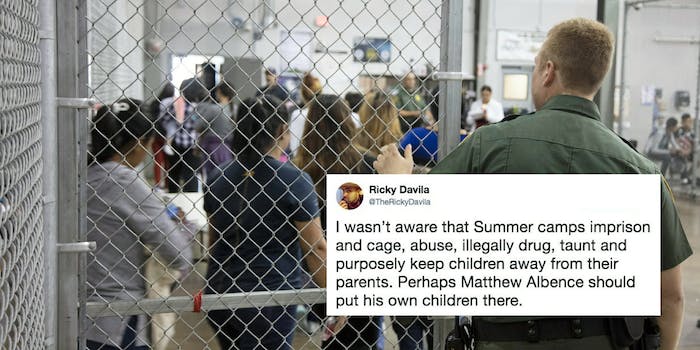 A senior U.S. Immigration and Customs Enforcement (ICE) official’s idea of “summer camp” is being picked apart online after he received a proper grilling from Sen. Mazie Hirono (D-Hawaii) about the conditions of family detention centers.

While being questioned at a Senate Judiciary Committee hearing on Tuesday, ICE official Matthew Albence, head of enforcement and removal operations, said his “best” way to describe the family detention centers housing immigrant children who are still separated from their families would be “a summer camp.”

According to NPR, an estimated 550 children of the original 2,500 separated from their parents under Trump’s zero-tolerance policy have yet to be reunified. Under a deadline set by Judge Dana Sabraw, who set the original family reunification deadlines last month, Trump’s administration has until Thursday to outline their reunification plan for these remaining children. More than 400 of these parents have already been deported from the U.S.

When pressed by Hirono if Albence and other top immigration officials would allow their own children to stay at these “summer camps,” Albence didn’t answer the question, despite having boasted about the 24/7 access to food and water, educational and recreational “opportunities,” an “medical, dental, and mental health opportunities.”

“I think we’re missing the point,” Albence told Hirono. “These individuals are there because they have broken a law…”

.@ICEgov testified that the detention centers immigrant families are being held in are like "summer camps." We know that's not true. So I had a simple question for our witnesses– would you send your kids to one of these detention centers? pic.twitter.com/FGMNBh4AxI

.@maziehirono is now asking the ICE officials who said the family detention centers were like "summer camps" if he would send his own kid there. Instead of answering, he says: "Those people are only there because they broke the law."

Across Twitter, witnesses of Albence’s sideways testimony slammed him for using the term “summer camp” to describe the realities that these children in these facilities face—being forcefully separated from a parent, sometimes without warning, and being forced to deal with the trauma of that separation, and the idea that they may not be able to be reunited with their parents at all.

The head of ICE's enforcement division compared family detention centers to summer camps. Is this what you remember summer camp was like? pic.twitter.com/BuhmxyBFnt

Albence just called the detention centers "summer camps" & is claiming most parents volunteering to give their children up to the us. This is simply not true.

Went to the Jewish Museum in Rome and snapped a photo of a young man's postcard to his mom from a Concentration Camp, with the translation.

I thought of it, this AM, upon hearing ICE described child detention camps as being like summer camp. pic.twitter.com/GNfXVvaOMQ

I wasn’t aware that Summer camps imprison and cage, abuse, illegally drug, taunt and purposely keep children away from their parents. Perhaps Matthew Albence should put his own children there.https://t.co/sJAFuWJw5k

The SOZE Agency understands that detention centers, cages aren't "summer camps." We understand #FamiliesBelongTogether and to be free.

Last week, we went down to Washington, D.C. to help organize I AM A CHILD action in anticipation of reunification deadline.

There is simply no comparison. This terminology is meant to normalize that which should never be considered normal, as well as, justify & minimize the unconscionable. @mindyfinn

I don’t recall psychotropics, chain link enclosures, and the prospect of never seeing may parents again at my summer camps

Several people are calling out Albence’s hypocrisy, asking him (and President Donald Trump) to send his children to these facilities if he thinks they’re so much like “summer camps.”

If migrant detention centers are like “summer camps”, then send your kids :))))

a proposal for that ICE guy who testified today the detainment centers are “summer camps” with food and soccer. To you sir I say put all of YOUR children in a center FOREVER SO you will never see or hear them again. How do you like that now Mr. “summer camp”. Now not so nICE.

I knew this administration was corruptas AF, but that pales in comparison to being outright cruel and inhumane to CHILDREN! Perhaps if these detentions are such “summer camps” perhaps @realDonaldTrump @FLOTUS should send Barron there for a few weeks. #morningjoe #msnbc

Last time I checked, summer camps involved several hours of time outdoors, plenty of room to sleep, and the unavoidable end, allowing children to go home. Instead, children at these facilities are only allowed outside two hours a day, are stuck several children to one room, and have no end of their separation in sight.