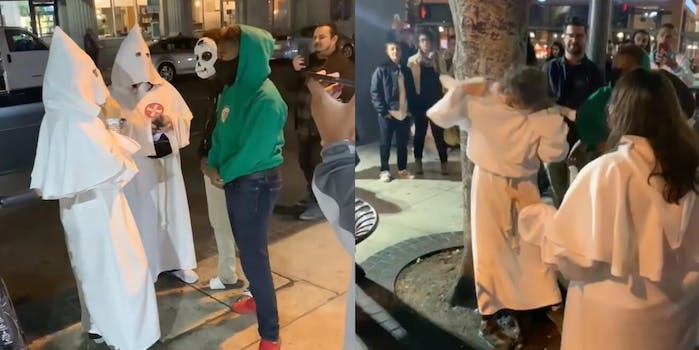 ‘Take it off!’: Crowd forces women to remove KKK costumes

The women, who are reportedly Latina, wore KKK hoods with the blood drop cross.

A viral video on Instagram shows two women being booed on the streets of downtown Los Angeles after they dressed up as Ku Klux Klan members for Halloween.

The video, shared by rapper Billy CEO on Sunday, has received more than 30,000 views and been shared on numerous other platforms.

The women are seen at the beginning of the video in cone-shaped white hoods and robes like the ones worn by KKK members. One of the women wears a blood drop cross, which has been classified by the Anti-Defamation League as a hate symbol.

The three-minute clip starts with a person in a green hoodie and face mask demanding the two women take off their KKK hoods. “Take it off! Take it off!” the person says while others remove the women’s hoods.

Billy CEO said in the Instagram video caption that she didn’t want to be violent because that would only cause more trouble.

“Unfortunately we would’ve been the ones behind bars for being Black in America and fighting the same fight out ancestry fought, we didn’t put our hands on them, we took those mask off and kindly escorted them out of LA,” she wrote.

Later in the video, the two women are followed by the crowd to a smoke shop, and an argument ensues at the shop’s entrance.

One of the women in a KKK costume is seen trying to engage in the conversation and tries to hug the person in the green hoodie. Later in the video, when another person asks the woman to apologize to the crowd, she appears to shake her head.

According to Billy CEO’s post, the women were Mexican. Many commenters expressed their anger over the racist costumes.

“As a Mexican woman I just wanna apologize for the stupidity/ignorance and shame these two brought upon us,” one user said.

“What in the ENTIRE FUCK… and they’re brown congrats to y’all for not knocking they asses out cause baby listen,” wrote entertainer Kelz Washington.

“Viewers are left wondering how anyone, especially Latinas, could think dressing like that was funny,” Yvette Montoya wrote of the incident on Hip Latina. “This is forever and always inappropriate and disgusting. It’s even more shocking that this would happen in LA.”

The incident sparked conversations on anti-Blackness in communities of color.

“We must address this anti-blackness before we proclaim POC solidarity because then shit like this happens,” Green Box Shop, an activist apparel Instagram page, wrote in a post with the video on Tuesday.