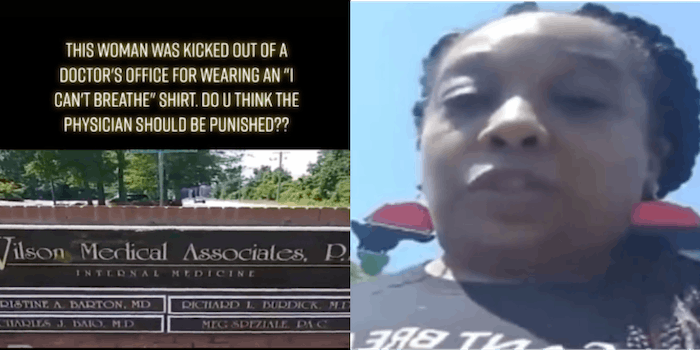 The woman says he called the shirt 'insulting.'

A Black woman who was accompanying her grandmother during a medical appointment said she was kicked out of the office by the doctor for wearing a shirt with the words “I Can’t Breathe” on it.

“I am shocked and appalled at what’s going on right now,” the woman says as she films outside of the doctor’s office, Wilson Medical Associates.

In the midst of discussing her grandmother’s care, the doctor allegedly asked her to step out of the office to speak with her. He told the woman she had to leave the office because her shirt was “insulting,” the woman says in the video.

“This is blatant racism. What are we gone do about this? We’re at a doctor’s office, and I’m not allowed to sit in the doctor’s office because of my shirt ‘I Can’t Breathe.’ How is this insulting?” the woman says.

“I can’t breathe” is a rallying cry in protests against police brutality against Black people and racial injustice after the words were uttered by several Black people in the moments before they were killed by police.

The New York Times found at least 70 cases in which people have died in law enforcement custody after saying those three words.

The video was posted on TikTok by celebrity gossip blogger Perez Hilton, but, according to the woman in the video, she recorded it for her Facebook Live.

Hilton posted the video with the caption, “This woman was kicked out of a doctor’s office for wearing and ‘I Can’t Breathe’ shirt. Do u think the physician should be punished??”

Some people in the comments are calling on each other to leave negative reviews for the doctor’s office. “Flood his website with 1 star or 5 star to leave a bad comment,” wrote user @misskush2u.

People online are seemingly heeding the call. Wilson Medical Associates has received an onslaught of new, one-star reviews in the past few days.

“I’m annoyed that there isn’t a zero star option. So a patient’s attire causes her to get rejected of care? I wonder sometimes if doctors even pay attention to the oath that they take to serve as physicians. This place deserves to go bankrupt because obviously it’s not fit to serve the community,” one Google reviewer wrote to accompany their one-star review.