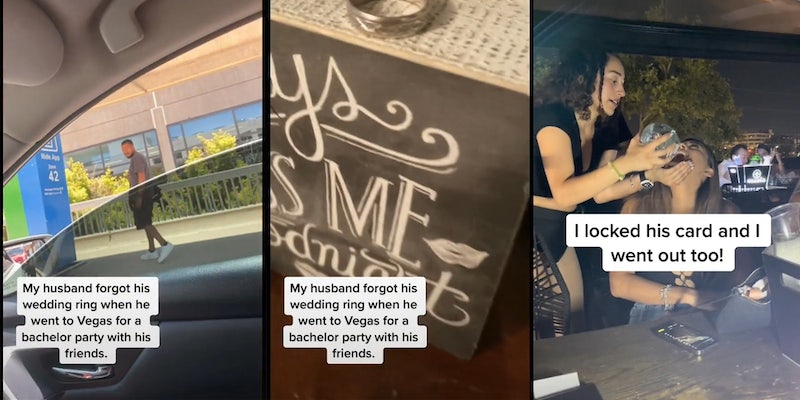 ‘He forgets his ring, his card forgets to work’: Woman gets revenge on husband who ‘forgot’ wedding ring before Vegas trip

'No one accidentally forgets their ring before a trip to Vegas.'

A woman’s viral revenge story chronicled in a popular TikTok has received over 10.5 million views and garnered tons of support online.

TikToker Gaby Leon (@gabyl14) says that she noticed her husband left his wedding ring at home before heading to Las Vegas with his friends for a bachelor party. While “what happens in Vegas, stays in Vegas” may be a popular saying, Gaby wasn’t having it.

She texted her husband asking him if he forgot anything before heading out on his trip, and he responds with “Wat did I forget,” before ultimately saying “My ring!!!???” after one more prod from his wife.

Their conversation continues where she writes, “You think????,” but it’s his single emoji response, a smug face, that probably set her off.

“So we’re single this weekend? Is that what you were trying to tell me?” she asks. He replies with, “No.”

“Thats what it looks like to me! Enjoy your weekend!!” Gaby responds. Her husband then tries to fix the damage that’s already been done, saying, “Babe omg I forgot it.”

However, Gaby continues with the revenge plot, telling him to “Have fun!” before locking his card. She then goes out with her friends, showing screenshots of a banking app and quick clips of her and other women having booze poured into her mouth straight from a bottle at a bar or nightclub.

“He said ‘he forgot’ No soy Toxica ni mensa,” Gaby wrote in the caption, the Spanish phrase translating to “I’m not toxic or stupid” in English. She added, “I’m smarter than he thinks was I wrong?”

According to many commenters, no, she wasn’t. Some viewers claiming to be Vegas residents or having recently taken a trip to Sin City argued that Gaby’s instincts were correct.

“As a lady… from vegas. Babe no mistake,” one user wrote.

“The amount of ring tan lines I saw when I was in vegas,” another said.

Others said that the fact that he immediately brought up the ring in their conversation is a clear sign that he knew exactly what he was doing.

“No one accidentally forgets their ring before a trip to vegas,” a TikToker claimed.

“Funny he knew EXACTLY what he forgot. everyone saying he could’ve taken it off when he got there well he didn’t and she found it and he knew…,” a second argued.

“No bc when you truly forget something , you don’t recall it so easily . Nah don’t gaslight into telling us this is tóxic. He’s wrong he knew [he left it],” a third agreed.

Many also praised Gaby for her revenge tactics, particularly locking his card and ensuring he would have a hard time getting access to funds while he partied with his pals.

“He forgets his ring, his card forgets to work. Crazy how things like that just happen,” one viewer said.

“Locking that card tho lmao good one,” another praised.

“Should have said, ‘it’s ok I’m bringing it to you’, ignored him and had him on is TOES!” a third suggested.

One woman in the comments section wrote that because he didn’t take his ring doesn’t necessarily mean that he was planning on cheating, as she did the same thing.

“I just got back from a Vegas bachelorette and didn’t take my ring,” she said. “Don’t ruin his time, let him have fun. He doesn’t have to be out of town to cheat.”

Tons of commenters asked Gaby for an update on what went down between her and her husband, but she has yet to share any specific updates regarding the situation.

However, more recent TikTok videos show Gaby celebrating at a wedding. One of the videos features a TikTok sound on the topic of revenge, which says, “the best revenge is no revenge. Let go, move on, and just be happy.”

While it’s definitely believable that if someone is inclined to cheat they’ll do so regardless of whatever city they’re in, there’s some research that indicates there’s a reason Vegas is called “Sin City.”

Local news station KLAS reported that Vegas is “ranked as one of the top cities for infidelity.” However, Orlando, Miami, and Atlanta all ranked higher than the desert entertainment oasis.

The Institute for Family Studies’ 2018 research on infidelity statistics in America reported that 20% of married men admitted to cheating on their significant others, and 13% of married women owned up to doing the same.

The Daily Dot has reached out to Gaby for further comment on TikTok.