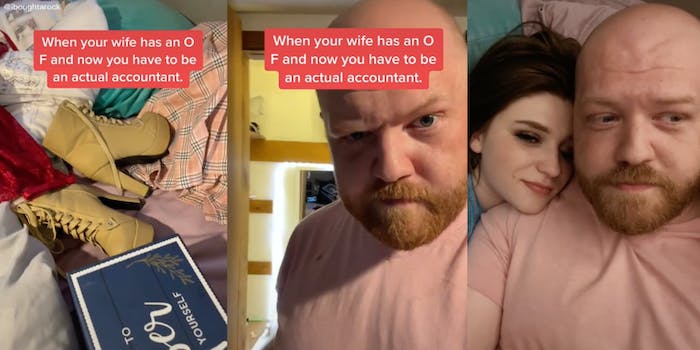 Craig said he didn’t expect the video to be a catalyst for a discussion on toxic masculinity and misogyny.

A man’s TikTok video about his wife’s OnlyFans account has viewers divided.

The video starts out by showing lingerie and heeled boots with the caption: “When your wife has an O F and now you have to be an actual accountant.” The TikToker searches on Google if butt plugs are tax-deductible as “I’m an Accountant” plays.

OnlyFans is a subscription-based site on which people pay creators monthly fees or tips in exchange for their content. Although the site is not solely for NSFW content, OnlyFans quickly became a place for sex workers and adult performers to post content that would get banned on other social media platforms. Creators can post X-rated images and videos as well as host live streams.

Craig, or @iboughtarock on TikTok, posted the video and received more than 875,000 views within a week. The comments section was filled with divisive opinions, from critics asking Craig to leave his wife to supporters applauding him for being a supportive husband.

People responded to comments telling Craig to leave his wife by accusing them of being insecure, while others praised him for being a supportive husband. “OMG I made it to supportive husband TikTok, where do I set up shop because I’m not leaving,” one user commented.

Craig responded to many comments, often with humor and quick dismissals of misogynistic responses. He told the Daily Dot that the video was filmed out of boredom while he was doing his taxes and looking at the different toys and accessories he and his wife had bought for her OnlyFans page.

From having six followers before posting the video, Craig’s account now has 9,000 followers and more than 880,000 likes.

“I hear a lot of people get themselves in situations like this, referring to it as surreal but I finally get what they mean,” Craig said. “I know there are a lot of ‘accountants’ and I thought if any of them see it, they might get a chuckle out of it just like I did. But I did not expect this. Not one bit.”

Although Craig was joking about what he calls “fiscally responsible butt plug ownership,” he said he didn’t expect the video to be a catalyst for a discussion on toxic masculinity and misogyny. In response to some of the comments by men that were hurtful or insensitive, Craig said he saw their comments coming from a place of hurt.

“There were plenty [of comments] that were oddly and suspiciously specific,” Craig said. “Some of those guys, they were saying such vile things that it’s hard to justify defending.”

But he still wanted to reach out and say, “Let’s talk this out. You guys clearly have seen some stuff.”

In another TikTok video, Craig talks about the importance of breaking down toxic masculinity and talking about men’s issues in a way that “doesn’t rely on misogyny or sexism.”

“I can handle being called a cuck and a simp if i can help just one guy get shit off their chest,” Craig says in the clip.

Craig told the Daily Dot that men are often raised to be the support for someone and that as soon as men need support, their value as a man diminishes.

“Now I exist in a space where I can be who I want to be without fear of judgment from people that matter,” Craig said. “That’s something I wish all men could have. I can just be my authentic self without fear of losing my ‘manhood.’”

Since the video was posted, Craig’s wife’s OnlyFans page has received a significant increase in subscribers. They previously only shared her profile on safe spaces on Reddit. So since the video went viral, the two have had to monitor social media more carefully for mean comments largely attacking her physical appearance.

“What people think is your soft spot tells you a lot about what their soft sport is or how they view the person,” Craig said.

In response to comments about them doing it for the money, he said people are quick to assume their intentions. Craig’s wife wanted to save up money for a “mommy makeover” because she was self-conscious of her body after having three kids.

“We couldn’t justify the expense with kids to feed so we were like, let’s see if we can make a couple bucks and pay for it,” Craig said.

In another TikTok video, Craig addresses one comment in particular that said: “Now I can get all the good stuff bout her for a small price and he got to deal with the mess she sometimes makes.”

“This implies that my wife, and by extension all women derive their value as human beings, from their sexuality and that everything else is just something you have to put up with,” Craig says in the video. “I married her for the messes. Her ability to clean up those messes, learn from them, and make all new ones. Together. We’re a partnership.”

While being thrown into the public sphere is still something Craig and his wife are grappling with, he told the Daily Dot that he hopes his platform encourages more men to engage in discussions with more respect and vulnerability.

“I want to see men be able to talk about themselves and how they feel about things without resorting to diminishing or belittling others,” Craig said.