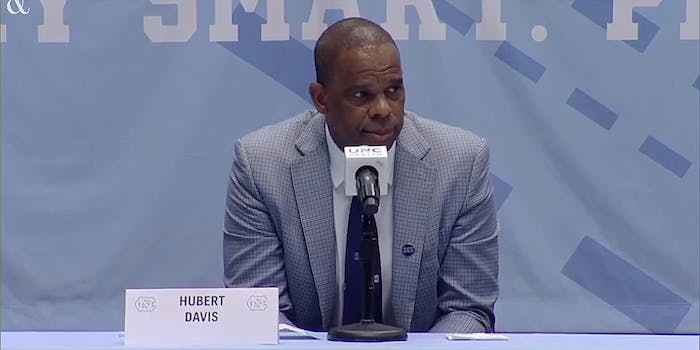 'I'm very proud to be African-American.'

Hubert Davis was recently announced as the head men’s basketball coach for the University of North Carolina, a traditional, “blue blood” basketball powerhouse. In replacing a legend in Roy Williams, he’s the first Black head coach in the program’s vaunted hoops history.

However, during the introductory press conference, while answering a question related to the importance of Black men in NCAA head coaching capacities, the former Tarheel told the gallery that he was “proud that his wife was white.”

For me, the comment came off as a slight to Black women, setting off a larger conversation of accomplished Black men somehow “ascending” beyond their Blackness, with white women as a trophy.

According to the Focus, Davis’ wife is named Leslie and they met on campus at UNC—she graduated a year after he did in ‘92. They have three children.

It’s an unusual comment in that it was completely unprompted. On the positive side, Davis made mention of the fact that just 26% of all NCAA Division I head coaches are Black. (Most of that percentage exists at positions within historically Black colleges and universities.) In the “Power Five” conferences alone (the ACC, Big Ten, Big 12, Pac-12, and SEC), Black men make up 56% of the 65 programs’ basketball rosters.

The comment from Davis set off certain segments of Black Twitter. Reactions that arrived weren’t necessarily based on the reality that his wife is white; it was more his unprompted pride that made some Black people pause. And they certainly got the memes off.

@LeeLuu32 even compared Davis to the hardcore coon character, Uncle Ruckus, from The Boondocks.

As @LavishLife243 wrote by way of an intersectional take: “I don’t care that his wife is white, but it irks me that some Black men really think having an interracial family and being accepted by whites is the American Dream. Like the goal of the Civil Rights Act was to advance and transcend race WITHOUT Black women. It’s very telling.”