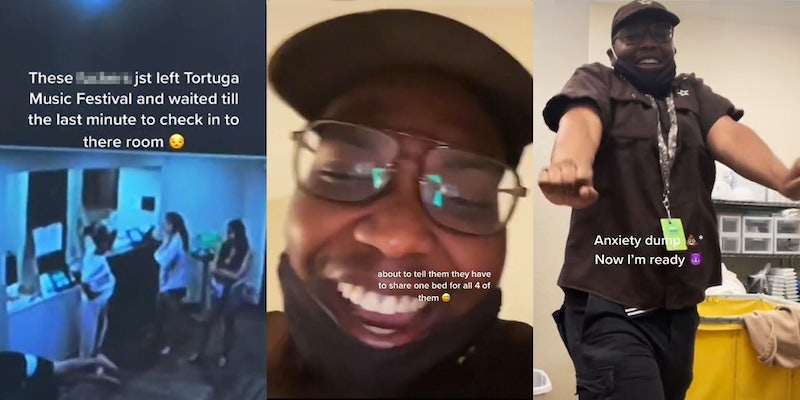 ‘About to tell them they have to share 1 bed for all 4 of them’: Hotel worker shows why guests shouldn’t wait until ‘last minute to check in’

'These f*ckers just left Tortuga Music Festival and waited til the last minute.'

Check-in times do matter, according to a hotel worker’s viral TikTok.

The first video the hotel worker, Reby Sully (@reb.ys), uploaded starts with security camera footage of guests who are allegedly checking in late, at midnight.

“These fuckers just left Tortuga Music Festival and waited til the last minute to check in to their room,” the text overlay and voiceover note.

The video then cuts to Sully laughing. “About to tell them they have to share one bed for all four of them,” it continues.

Sully’s video was viewed over 1 million times. Many viewers are seemingly reacting to critical comments Sully may have gotten. “Y’all obviously don’t understand how hotels work. You have until a certain time to check in otherwise your room is up for grabs!” one viewer said.

If there were critical comments, they have since been drowned out by supportive ones.

Sully also filmed his interaction with one of the guests after telling them they had to share one bed. The guest, off-camera, accuses the hotel of overbooking itself.

Sully dubbed them a “guest from hell” in the video’s caption.

Sully lets them know he called “every hotel in the area” on their behalf and that his manager will switch their rooms the next day. “What does [the manager] want us to do? Sleep four people to one goddamn bed?” the guest questions. “That’s your bad for overbooking and putting all of us into one room.”

The guest then demands to speak with a manager.

Sully said in the text overlay that police escorted the group out, they lost the room, and every other hotel in the area was fully booked. He said the group took up two hours of his shift.

The video ends with a public service announcement to hotel guests: “If check-in is at a specific time, do not come 8hrs+ after and expecting to still have your room, always call first!!!”

The Daily Dot reached out to Sully via TikTok comment.