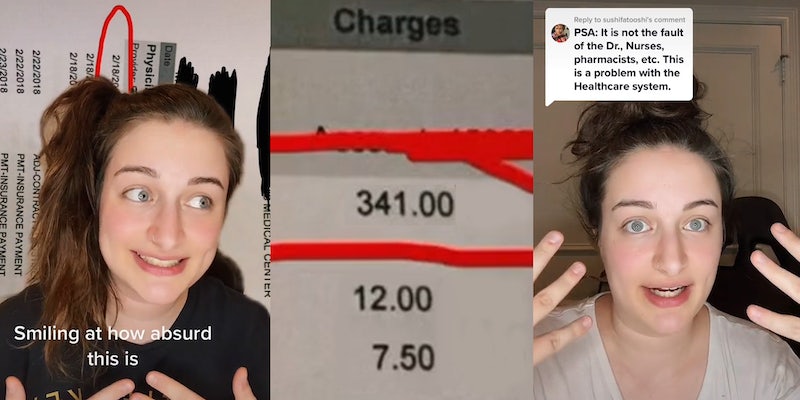 ‘You would think after spending $2 million on her medical expenses that the death would be free’: TikToker says hospital charged her $340 for confirmation of her daughter’s death

'She was not discharged, she died.'

A mother on TikTok has gone viral for sharing the administrative charges she received from the hospital after her daughter died.

“You would think after spending $2 million on her medical expenses that the death would be free,” user Linzathy (@whenlifegivesyoulindzes) said.

@whenlifegivesyoulindzes It wouldn’t let me stitch @thecooljack4 but he’s so right!! This 💩 happened to me. On a seriously note, the #americanhealthcaresystem needs #reform ♬ Glimpse of Cash – There I Ruined It

Her story has racked up over 3.4 million views on the platform since she shared the video July 29. Linzathy began the video by including a clip of a TikTok from another creator (@thecooljack4), who joked about a situation that was very similar to Linzathy’s.

“It wouldn’t let me stitch @thecooljack4 but he’s so right!! This [shit] happened to me. On a serious note, the #americanhealthcaresystem needs #reform,” she wrote in the caption.

In the video, the TikToker shows the screenshot of a hospital bill with a fee of $341 for a “Hospital Discharge Day Management.”

“She was not discharged, she died,” Linzathy says.

She explains that the charge was most likely for when the doctor came in for “less than 5 seconds” to check her heartbeat—even though they already knew her daughter had died.

“As a healthcare worker in America – I really want to know where the $$$ goes. Not to us workers for sure. So ridiculous that they charge that much,” one user wrote.

“I’m so sorry for your loss. America’s medical system is completely broken and nobody knows how bad it truly is until living somewhere else,” another added.

Linzathy goes on in another video to explain she has no resentment toward the doctor, who cared for her daughter throughout her cancer treatment.

“This is a problem with the system as a whole,” she says.

The Daily Dot reached out to Linzathy via TikTok comment, as other forms of contact were unavailable.