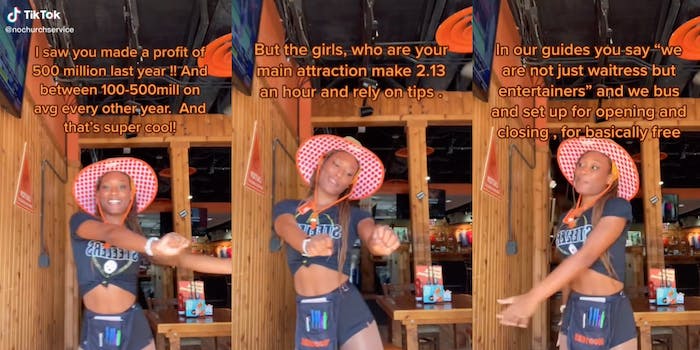 ‘You are the reason for their business’: Hooters worker demands fair wages in viral TikTok

'These corporations are crazy.'

A TikToker and Hooters employee has called out the restaurant for the way it pays its staff, especially Hooters Girls.

TikToker @nochurchservice posted the video Sept. 19, garnering over 171,000 views, asking for $8 an hour with a 15% gratuity on tables larger than six.

“Hey Hooters!” a text overlay on the video reads. “I saw you made a profit of 500 million this year! And between 100 million-500 mill average every other year. And that’s super cool! But the girls, who who are your main attraction make 2.13 an hour and rely on tips. In our guides you say ‘we are not just waitresses but entertainers’ and we bus and set up for opening and closing, for basically free. So let’s talk.”

According to research company Inc Fact, Hooters’ annual revenue is between $100 million and $500 million. In August, Business Insider reported that the chain’s sales were “better than ever.”

The TikToker also said that while working for Hooters, makeup, hair and uniforms must be pristine and paid for by the girls themselves.

She has since posted additional videos about working at Hooters, primarily focusing on the disparity she has described between what the company earns and what it pays its workers.

Commenters have mostly expressed support for @nochurchservice, pointing out that Hooters earns its money through their employees.

“They’re not gonna like you speaking up, but I’m so glad you are,” one commenter wrote. “You are the reason for their business. These corporations are crazy.”

“they made their money because they pay you badly!” another said. “you made them that money!”

Others stated that the TikToker’s proposed hourly rate is still too low and does not equate to a livable wage.

“$8 is too low,” a viewer wrote. “They’re using you as part of the marketing. You should be making $25 an hour minimum.”

“8 is nowhere close to a liveable wage the fact that you have to go that low is scary,” another commented.

One user wrote that they’d had bad experiences with very large tables not tipping, implying that she herself also worked at the restaurant.

“I once had 2 25 tops back to back (including kids I kept entertained so the parents could eat) and no tip,” they wrote. “All right orders, danced, laughed and all.”

Neither Hooters or @nochurchservice responded to requests for comment before publication time.