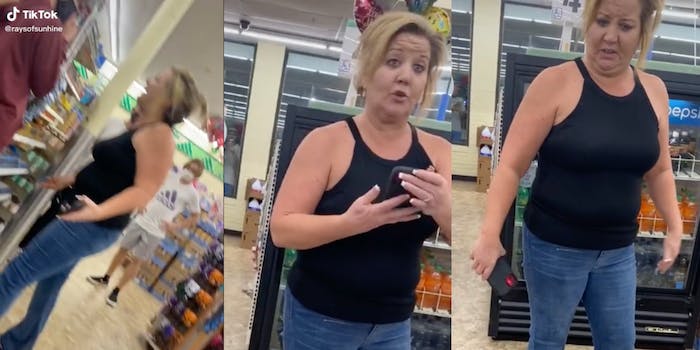 A TikTok video featuring a homophobic “Karen” verbally abusing teens at a Florida Dollar Tree is going viral after teens recorded her tirade and “exposed” her online.

The video starts with a woman getting inches from a teen’s face and screaming homophobic slurs at him. It’s unclear why they are arguing or why the woman is so upset in the first place.

“Are you a queer?” she screams at the boy. “What are you? You like it up the a**hole? Cause you look like you like it up your a**hole.”

The teens start laughing to themselves and try to distance themselves from the woman, which only angers her more. The young woman recording the argument, Gabby, asks if she is OK. But this made things worse, and the woman walks up to Gabby and starts yelling at her instead.

After going back and forth, Gabby asks the Karen if she is going to go drive her car while so upset, and suggests they get the police involved.

“You’re gonna go hurt somebody if you drive your car,” Gabby says.

The woman then starts attacking Gabby and says she looks like she “grew up in a trailer park.”

“Are you even dressed?” she asks Gabby.

Gabby, or @raysofsunhine on TikTok, explains in another video that she walked into the store with her girlfriend and saw the woman yelling at the kids. Gabby recorded the woman, and when the woman left the store, Gabby asked the teens what happened and if they were OK. The kids told Gabby the woman followed them to the Dollar Tree from another store and was harassing them the whole time.

“This behavior is disgusting and unacceptable,” Gabby says in a follow-up video. “It’s not OK.”

Commenters agreed and said they couldn’t believe a grown woman was treating children this way.

“She said YOU look like ur in a trailer park?! Does she own a mirror?” one user commented.

“Why didn’t y’all jump her” another joked.

“If sunburn was a person,” someone compared.

Many felt someone needed to put this Karen in her place.

“Attention all grown women – when u see another grown woman bullying young ones like this, it’s ok to bully her,” one user said.

“Ma’am this is a Dollar Tree,” one TikToker concluded.