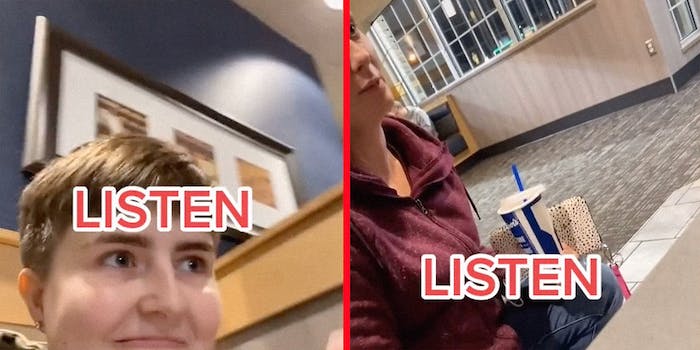 'The truth's gotta be out there.'

A “Christian Karen” left TikTok viewers stunned after she started preaching against homosexuality to strangers at a fast-food restaurant.

Kaiden, who goes by @kalessh on TikTok, turned his camera on after the woman approached the table where he and his cousin, Jordan, were having their meal. He noted in a text overlay that she had been staring at them for a while before she interrupted.

“You go to church anywhere?” the woman asks at the start, getting straight to the point.

When both Kaiden and Jordan answer that they don’t, she follows up by asking if they know how to get to heaven. “I don’t like… know you guys at all,” Jordan replies.

“I know, I know. I just see you guys… You guys aren’t, like, girlfriends, are you?” the woman asks, misgendering Kaiden and not even bothering to hide the disdain in her voice.

Jordan tells her that they’re cousins but points out that it wouldn’t be any of her business if it had turned out they were dating.

“You’re right, you’re right,” the woman says. “But I just wanna let you guys know, because they don’t teach you young kids anything about God anymore, that it’s just not the right way to live.”

She adds that she’s not trying to “force” her opinion on them, “but the truth’s gotta be out there.”

“You came over here out of like, nowhere,” Jordan says, but the woman is more than prepared to push back against that.

“God told me to come over and talk to you guys,” she replies.

The incident didn’t sit any better with viewers than it did with Kaiden and Jordan.

“‘Do you know how to get to heaven’ yes actually, walk straight out those doors, take a left, and walk directly into traffic, that should do the trick,” user @makaylah.lee suggested.

User @kenifritz theorized that this woman and others like her are “always blaming it on god instead of just admitting they were trying to push their beliefs because they wanted to.”

There were a few people in the comments who supported the woman’s decision to be intrusive and condescending. User @marieanddude, who claimed Christian Karen “wasn’t forcing anything.”

“Spreading the gospel is what’s christians are called to do to help save souls,” she wrote.

But the majority opinion was that the woman should have minded her own business, especially when it became clear Kaiden and Jordan didn’t want to engage with her or her beliefs.

Still, as @libralibrary pointed out, Christian Karen will probably “go to her Sunday group and talk about this encounter and they are all going to tell her what a hero she is.” And that may very well have been the entire point.