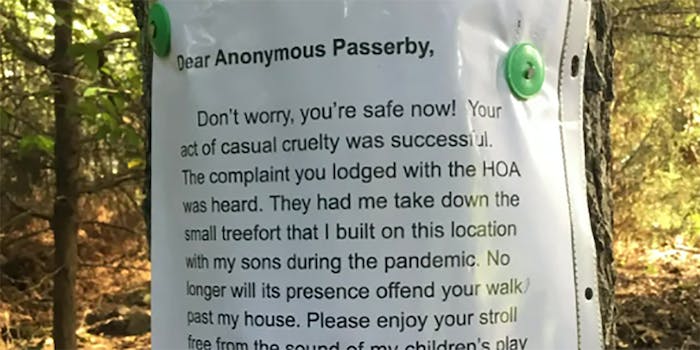 'Please enjoy your stroll free from the sound of my children's play and laughter.'

A picture circulating around Reddit subreddits is telling a heartbreaking tale: A father posted a note to a tree saying that, thanks to a Karen who allegedly told on him, his Homeowners Association (HOA) made him take down a treehouse that his kids were enjoying on his property.

The photo, posted to both the r/FuckYouKaren and r/Facepalm subreddits, showed a printed-out letter, attached to a tree, put in a clear plastic three-ring binder sleeve to protect it from the elements. The letter was addressed to “Dear Anonymous Passerby,” but seemed to be specifically directed at the Karen who tattled.

The letter went on to say, “The complaint you lodged against the HOA was heard. They had me take down the small treefort that I built on this location with my sons during the pandemic.”

It then resumed with venom: “No longer will its presence offend your walk past my house. Please enjoy your stroll free from the sound of my children’s play and laughter. They are safely back inside now, watching television I’m sure.”

It concludes, “Enjoy the unobstructed view of my backyard. I will try to keep it up to code.”

On the r/Facepalm subreddit, a space for those who want to “share the stupidity of people online and IRL,” some people were in disbelief, with one cracking, “Now they will report them for not getting a permit to place that note on the tree,” with others riffing on that comment.

Others debated the usefulness of HOAs, with one person noting that once her husband got elected to their neighborhood’s HOA, their nosy neighbors suddenly lost their appetite to complain about them. “They went from complaining about us having our porch light on at night and how our dog barked all night (that night no one was home, not even our dog) to having zero complaints since we joined like two years ago,” that Redditor wrote.

On the anti-Karen subreddit, attention also centered on HOAs and the enforcement of HOA guidelines. One Redditor had a long post about how a now-estranged brother went to war with an HOA because he painted his house a color that slightly deviated from “one of two or three shades of putty-beige” that were approved. The brother lost and had to get his house repainted in one of the approved colors.

Another declared, “Cut the tree down,” and “Salt and burn the grass,” observing, “If you can’t do what you want with your backyard due to the HOA, make it impossible to comply with the rules.”

(As of press time, no Redditors came in to respond how much worse that would make the father’s quality of life, though one did downvote it.)