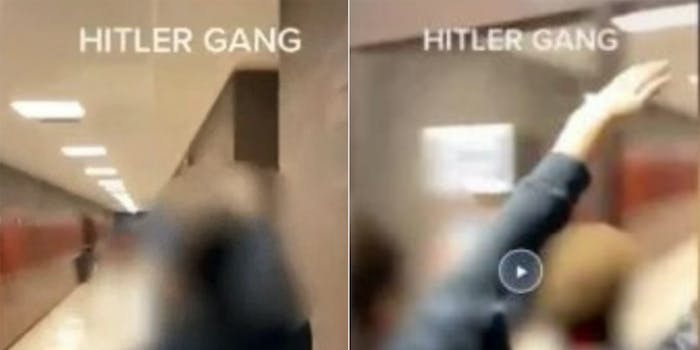 The local police department is investigating the incident.

Per the Register, Zaret presented the 10-second video to the Iowa newspaper showing two white male students “walking through a school hallway with their arms extended in an apparent Nazi salute. Hashtags attached to the video express hatred toward Jewish people and gay people, including one that said ‘kill all’ before an anti-LGBTQ slur.”

“That’s why it seems so much more specifically targeted towards Ori,” Zaret said to the paper. “There aren’t that many Jews in Grinnell, to begin with, let alone LGBTQ Jews.”

In a KCCI video, Zaret, whose child is now “scared to go to school,” recalled his grandparents’ history, saying that their “older brothers and sisters were slaughtered in the pogrom in Russia.”

Zaret just moved his family to Grinnell in January, per the report.

“The Grinnell Police Department is investigating this incident vigorously, and we are committed to ensuring our students are safe and secure while attending school and in their community,” Grinnell Police Chief Michael McClelland stated in a news release.

In the interview over the “Hitler Gang” video, Zaret said the community had provided an “outpouring of support.”

“My hope is that this is a spotlight on [hate] and that people can’t pretend and wish it away anymore,” said Zaret.