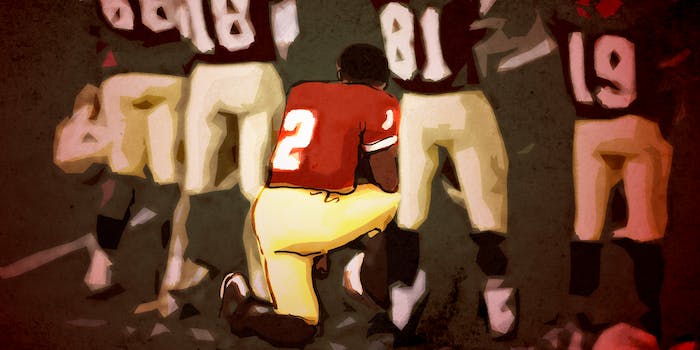 This weekend, a high school football player was suspended for one game after following in the footsteps of Colin Kaepernick and taking a knee during the national anthem. But thanks to outrage on Twitter and beyond, that suspension has now been lifted.

My coaches and principals have decided to suspend me for 1 game.

Thanks to all your love and support my suspension of 1 game has been terminated! pic.twitter.com/a8RB9c200N

Mike Oppong, a junior at Doherty Memorial High in Worcester, Massachusetts, knelt during the national anthem in protest of racial injustice, reported Black Sports Online. After he announced he had been suspended, online support came swiftly, with activists like Deray McKesson and Shaun King tweeting about him, and many calling for supporters to call his school and complain about a violation of First Amendment rights.

We support you, @Oppong_5. & your coaches & principals are on the wrong side of justice. https://t.co/Yl6nZKgG5F

Got more info on @Oppong_5 Suspension, appears coach hands were tied, it went above him it was the Principals who made decision to suspend

Oppong told the Daily Dot over Twitter DM that the school has taken away his suspension, and he tweeted his thanks to supporters earlier this morning. Calls to Doherty Memorial High got the busy signal.

I just want to thank all of you guys for the support you all gave me throughout this whole situation and by God's grace Justice was served!

However, the law has only been around since 1923, and according to a Congressional Research Service report, “The Flag Code is a codification of customs and rules established for the use of certain civilians and civilian groups. No penalty or punishment is specified in the Flag Code for display of the flag of the United States in a manner other than as suggested. Cases … have concluded that the Flag Code does not proscribe conduct, but is merely declaratory and advisory.”

More and more NFL, college, and high school football players are taking to kneeling during the anthem to protest racism in America. And just as a reminder, the third verse of “The Star Spangled Banner,” which is not typically sung, explicitly mentions slavery.