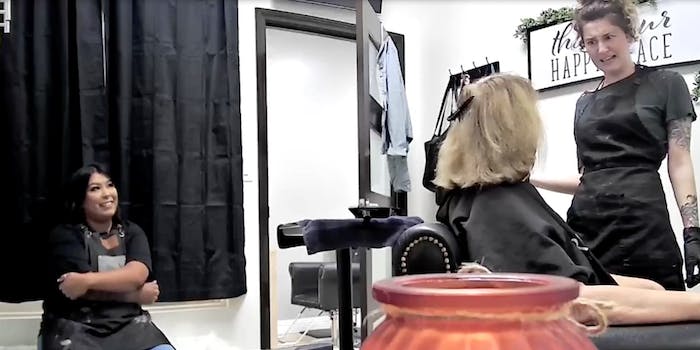 ‘Karen’ is so privileged that she goes to hit hairstylist, still expects service

'You have half your color on, and you’re going to talk to me like that?'

A Los Angeles hairstylist is getting a lot of support after security footage showed how she dealt with a client who disrespected her assistant.

Sharon Spellman was doing a simple root touch-up job on a longtime client, Robin, when she mentioned that her new assistant would be finishing it up.

Despite this being a common practice in hair salons, Robin took issue with the turn of events, expressing as much in a very disrespectful manner.

“She basically told me, ‘Sit your ass down, you’re going to do my hair when I tell you to do it,’” Spellman said in an Instagram Live after the video went viral.

The video itself shows Spellman going out of her way to reassure Robin that her assistant is highly trained and will do a great job helping out.

“It’s me, I would never do anything to make you uncomfortable,” the stylist says, keeping a playful tone in an attempt to diffuse the situation.

Robin, however, threatens to leave halfway through the session, which Spellman doesn’t take lightly.

“You have half your color on, and you’re going to talk to me like that?” she asks. “Robin!”

As Robin becomes increasingly agitated, Spellman again asks her not to speak so disrespectfully, at which point Robin makes a blatantly threatening move toward her, as if she’s going to hit her over the disagreement.

“Robin, get the f*ck out,” Spellman says, immediately ushering her client out of the chair.

Robin, bewildered at the idea that her actions have consequences, makes a few attempts to apologize so as to get Spellman to finish up her hair after all. But this stylist wasn’t interested in Robin’s disrespect toward her assistant and was clearly done trying to reason with her after a threat of physical violence.

After the video went viral, Spellman went on Instagram Live to clarify that she had had issues with Robin treating people in her salon disrespectfully in the past.

“She has been my client for like a year and a half, two years now. And she was the client in the salon, prior to me working at the salon, that was getting passed around because nobody could handle her energies,” she said. “She would sometimes kind of be out of line towards other people in the salon, and I would look at her, and I would be like, ‘Robin, that’s not very nice. We can’t talk to people that way.’”

But Spellman said that with her assistant, Alex, she felt that Robin’s disrespect crossed the line into racism.

“She judged her from the jump,” she said, recalling other times Robin seemed to be making disrespectful comments about minorities, specifically Mexican people.

Spellman, in part, captioned the video on Instagram, “ROBIN IS THE NEW KAREN Y’ALL.”

Spellman’s handling of the situation was largely commended by folks online, who couldn’t believe Robin had the audacity to speak to these women in such a manner, especially while expecting to be served.

“I do not condone racism, violence, or disrespect!!!!” Spellman wrote alongside the video. “I understand people are going through their own hardships but, WE ALL ARE! That is not an excuse to treat others poorly!!!”

Robin has reportedly been banned from the salon since the incident.