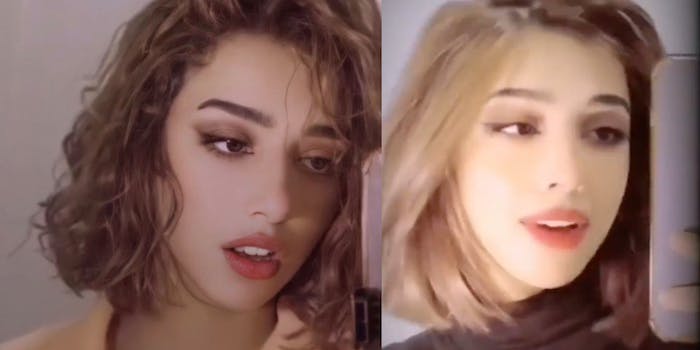 Hadil's family is allegedly now trying to get her TikTok account scrubbed.

A young woman in Saudi Arabia was allegedly killed by her brother for revealing her face on TikTok, according to TikToker and women’s rights activist, @infidelnoodle.

TikTok user @infidelnoodle, whose name is Ayesha Mohammed, shared a video detailing the death of Hadil, who reportedly shared photos of her face on her own TikTok account, @jezeel.56.

“I learnt of Hadil’s story through Twitter – it was discussed widely among young Arab users,” Mohammed told the Daily Dot.

Middle East Eye reported that Hadil was allegedly stabbed by her bother.

In Mohammed’s video, Mohammed says Hadil was killed in April and that her parents have since dropped the charges against her brother. “Meaning that he is free to go and live his life however he wants to,” Mohammed says in the video.

She adds that Hadil’s parents have gone to great lengths to get her TikTok account taken down and replace the content on it with Islamic content. At least one of the videos, posted earlier in the week on the account, shows a scene from Mecca, the holy site for Islamic pilgrimages.

“All of this done in an attempt to remove Hadil’s face from this world forever,” Mohammed says in the video.

The video has received more than 500,000 views since being posted on May 8 and was reposted to Reddit and Twitter.

Mohammed told the Daily Dot that the frequency of so-called “honor killings” is alarming. In January, a Saudi woman claimed that her brothers killed their sister for having a Snapchat account. According to a February Economist report, countries in the Middle East don’t have statistics regarding honor killings even though the practice is reportedly common, suggesting a lack of willingness to address it.

“Hadil’s story is unfortunately not a unique case or a ‘once off,’” Mohammed told the Daily Dot. “I have heard reports from people living in Saudi that additional honour killings have taken place since Hadil’s death.”

People are expressing outrage and demanding justice with the “Justice For Hadil” hashtag on social media.

Mohammed, who describes herself as an “ex-muslim atheist,” has a large following on both TikTok and Twitter, where shares her experience of being an ex-Muslim. Many of her videos generate comments from trolls.

“My video is about helping people, you are not the target audience,” she says in a video responding to haters.

A lot of the hate she is receiving came from a previous post of hers in which she talks about measures people can take when they’re being forced to fast, such as sneaking in food or pretending to be sick. “Ramadan Mubarak to those who do celebrate and enjoy it,” she says, concluding the video.

Mohammed told the Daily Dot that “as bleak as it may sound,” she’s “grown used to the hate messages.”

“I have dealt with threats and doxxing in the past, but thankfully my local police department is very understanding and supportive. There is a level of risk that you must acknowledge and accept when you choose to engage in this kind of activism,” she said.