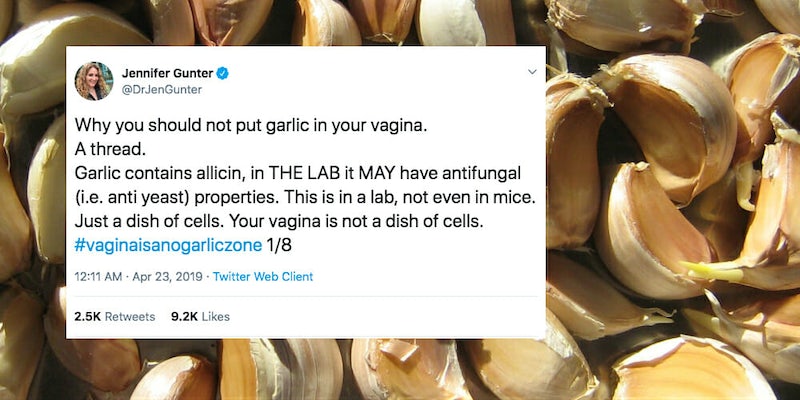 Here's why you shouldn't listen to the 'vaginal garlic aficionados.'

The rise in pseudoscience doesn’t seem to be slowing down anytime soon, as a gynecologist just had to explain why garlic shouldn’t go in vaginas in a now-viral Twitter thread.

“Lots of vaginal garlic aficionados (I SHOULDN’T HAVE TO TWEET THAT IN 2019, BUT HERE WE ARE) recommend inserting a clove,” Dr. Jennifer Gunter tweeted.

Gunter posted her eight-part thread on Tuesday, and it has since then amassed thousands of retweets and likes.

Apparently, there are people out there who are putting garlic in their vaginas to cure yeast infections. But Gunter wants to set the record straight: Garlic in vaginas is a big no-no.

Lots of vaginal garlic aficionados (I SHOULDN'T HAVE TO TWEET THAT IN 2019, BUT HERE WE ARE) recommend inserting a clove. This means they don't understand for allicin to be released the garlic has to be cut or crushed. Sigh. #vaginaisanogarliczone 2/8

She said “vaginal garlic aficionados” usually don’t even insert the garlic properly. This is because they use a whole clove rather than crushed garlic. Only the crushed garlic would release the compound containing the anti-yeast properties they are looking for.

She then explained how impossible it would be for the garlic to work with a hypothetical scenario. For starters, you would have to crush it up and somehow stuff it up your vagina.

Then you still have to worry about the “dirt thing.” Gunter explained that garlic carries bacteria from soil, which could make a “yeasty vagina” only worse. And then a gynecologist might have to fish out the garlic later on.

So for garlic to work you would have to crush it and stuff it up somehow. There is still the dirt thing. And the cut up garlic on raw tissues thing (OUCH). And the fishing of the garlic out by the gyno thing. #vaginaisanogarliczone 4/8

Gunter then went on to describe how it may be possible for garlic to cause biofilms in the vagina. Biofilm is a layer of bacteria that you definitely don’t want near your genitals.

As 50-70% of women who self treat for vaginal yeast never actually had a yeast infection you can't say much, except half of them never had yeast to begin with so the irritation they had may have been a temporary thing and resolving wasn't garlic related #vaginaisanogarliczone 6/8

Gunter aptly signed off on all of her tweets with #vaginaisanogarliczone. And she had one more piece of advice: Don’t take advice from those recommending vaginal garlic for anything.

My advice, do not take medical advice from anyone recommending vaginal garlic for yeast or anything else. If you enjoyed this thread, you will like my book The Vagina Bible (August 27) #vaginaisanogarliczone https://t.co/G3azTcxTaI 8/8

Gunter did not immediately respond to the Daily Dot’s request for comment.