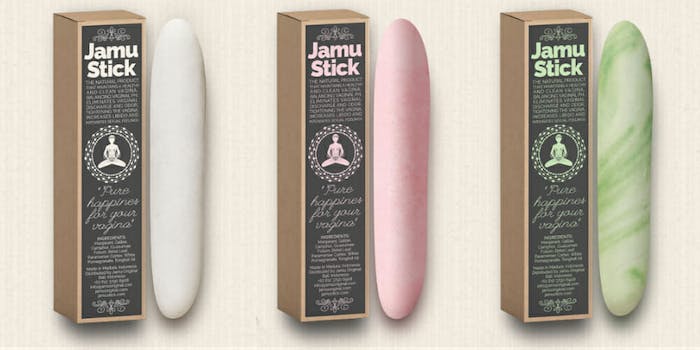 The internet is boggled by Jamu Stick, which claims to exfoliate vaginas

You don't need to exfoliate a mucous membrane!

People have been made to feel bad for their natural vaginas for centuries, but Jamu Stick is taking it to a new level by advertising a product that can get rid of “vaginal calluses.”

In a Facebook post that has since been deleted, along with the page for Jamu Stick, the company advertised “biological exfoliation of the callus inside of the vagina.” Why would anyone want to exfoliate their vagina? According to Jamu Stick, shedding the dead skin cells balances the vaginal micro-flora, increases sensitivity, and even improves the odor and consistency of vaginal secretions.

Here’s the thing: Vaginas don’t get calluses from use, and they don’t need to be exfoliated. In fairness to people who have bought this product, sex education is generally really bad in America and beyond; people put Gwyneth Paltrow’s jade eggs in their vaginas even though jade absorbs bacteria. But people who know better are getting out the message about Jamu Stick and vaginal exfoliation.

Might as well shove a loofah up my biscuit. #NO

As if that advertisement wasn’t bad enough, the homepage for Jamu Stick boldly proclaims: “Like a virgin again” and “return to your former tightness in seconds.” Sex experts have been very clear that sex does not permanently loosen the vagina in any way. Other claims include increasing libido, relieving menstrual pain, and strengthening vaginal muscles.

According to Jamu Stick, the secret herbal recipe has been “passed down from generation to generation” by Indonesian women to “maintain intimate purity and love for their husbands.” Some ingredients listed include white pomegranate (putting sugary stuff like fruit in your vagina can cause yeast infections), camphor (WebMD warns that camphor is toxic internally), and tongkat ali. To be fair to Jamu Stick, there is some evidence that tongkat ali can improve sexual function … but only in male animals.

According to the website, all you need to do is insert the stick in your vagina for a minimum of 30 seconds. “This gives enough time for the herbs stimulating hormone balance and strengthens the flabby or insensitive vaginal muscles,” the site says. It also claims that tightening is “noticeable immediately after the first use.”

Perhaps in response to the backlash, Jamu Stick removed the post, then the reviews, then later its entire Facebook presence. However, the site is still up for the timing being if you want to check out the diagrams, try to wrap your head around the claims, and be entranced by imagery of blossoming flora.

The Daily Dot has reached out to Jamu Stick for comment and will update the story with any response.