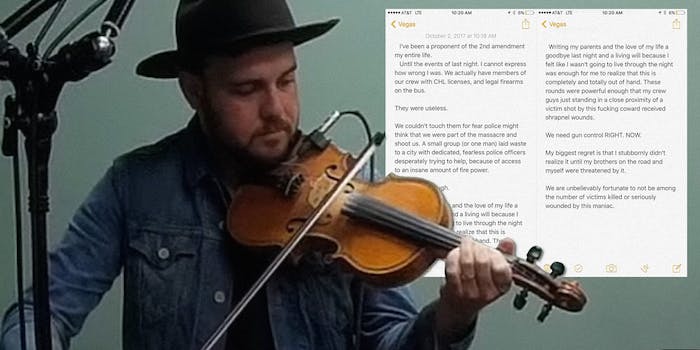 Why is empathy so conditional for conservatives?

When the rapid-fire gunshots started raining down from the 32nd floor of the Mandalay Bay in Las Vegas, musician Caleb Keeter, guitarist for Josh Abbott Band, was caught in the fray alongside bandmates, crew members, and friends. When the bullets stopped, more than 50 concertgoers were dead, and more than 500 were injured. Keeter made it out alive, but witnessing the carnage firsthand deeply affected him.

In a message posted on Twitter the day after the shooting, Keeter described writing goodbye notes to his loved ones and not knowing if he was going to make it through the night. “I have been a proponent of the second amendment my entire life,” he wrote. “Until the events of last night. I cannot express how wrong I was.”

Members of Keeter’s crew had concealed handgun licenses, and there were legal guns on the band’s tour bus. “They were useless,” Keeter wrote. “We couldn’t touch them for fear police might think we were part of the massacre and shoot us. One man laid waste to a city with dedicated, fearless police officers desperately trying to help, because of access to an insane amount of firepower. Enough is enough.”

Keeter called for gun control “right now.” “My biggest regret,” he wrote, “is that I stubbornly didn’t realize it until my brothers on the road and myself were threatened by it.”

Make no mistake: Keeter’s statement was brave and necessary, and his willingness to publicly say, “I was wrong” is admirable. We’ve all experienced moments of understanding and clarity that arose from firsthand experience—truths we were too hardheaded to admit until they became horrifically, unbearably obvious.

But Keeter’s change of heart illustrates a recurring theme among conservatives: an unwillingness to budge on an issue until it affects them directly.

Women’s rights are a gratuitous “special interest” until you have a daughter. Climate change is hippie propaganda until your Miami condo is underwater. Gun control is a liberal conspiracy until a madman loads thousands of rounds into 33 legally purchased weapons of war and starts massacring the crowd you’re standing in.

In other words, how many thousands of “proponents of the Second Amendment” are out there, who, like Keeter, won’t have their own awakening until they’re staring down the muzzle of a (legally purchased) assault rifle?

And how many more people have to die before that happens?

If you’re a gun fan in need of a wake-up call, there have been plenty of opportunities. Like when 20 little kids were slaughtered in their classrooms in Sandy Hook—that would have been an ideal time to reassess your love affair with semi-automatic weapons. Or if, like Keeter, you’ve been clinging to the idea that good guys with guns can stop bad guys with guns, know that multiple mass shootings at military bases have provided bloody case studies to the contrary.

There have been over 273 mass shootings in 2017, each one inviting every American citizen to weigh our lax gun laws against a body count and ask ourselves: “Are we making a fair trade here?”

Keeter was courageous in standing up to say it’s clear to him now that the trade isn’t fair anymore. If you want to see how many conservatives still do, try posting, “Hey, maybe we should regulate guns” on Facebook and see how quickly and eagerly pro-gun people will jump in and argue with you.

“Guns are irrelevant. This is about mental illness.”

“Bad people will always find a way to get guns.”

Would these people change their minds in the face of a first-hand experience as harrowing as the one Keeter went through? Maybe, but compassion shouldn’t be contingent on personal experience. You shouldn’t have to watch your friends be gunned down in the streets to want to do everything in your power to prevent that from happening.

I can’t help but think of the headline that went viral during the healthcare debate earlier this year, “I don’t know how to explain to you that you should care about other people.”

So many issues threatening the lives and welfare of Americans right now—healthcare, gun control, racism, police brutality, immigration reform—are being willfully ignored or gleefully rolled back because white men in power can’t fathom what it would be like to be bankrupted by a cancer diagnosis, or fear for their life during a traffic stop, or be ripped away from their families.

Meanwhile, the rest of us are stuck waiting for them to have an epiphany that maybe, just maybe, these issues could affect them directly. I don’t want anyone else to go through what Caleb Keeter went through. I don’t want anyone to lose a child or a parent or a friend to gun violence to realize this is a problem.

Unfortunately, at the rate we’re going, that day might come sooner rather than later.