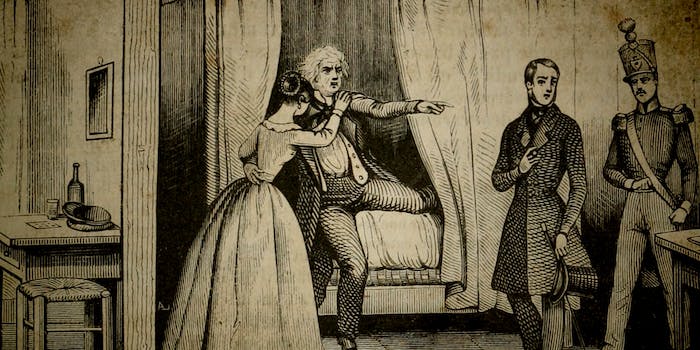 Men are really into women's issues—only when they become related to them.

On Tuesday, Hillary Clinton made history by becoming the first female Democratic Party nominee for president. Whatever you think of her politics, it is an unequivocally important moment, and one that inspired many women. But there was one group that was far more inspired than others—the fathers of daughters.

With respect to my Republican friends, as the father of a daughter, this is a special night #HRC pic.twitter.com/eWpQmODgCv

These men do not support Clinton because of her platforms or her career, which is fine. And I believe they want to their daughters to become president, which is terrific. But according to their remarks, the significance of Clinton’s milestone rests on a conditional disclaimer, a sentiment they perhaps hadn’t or wouldn’t have supported otherwise: Now that there’s familial proximity to a human with (presumably) the same genitalia as Hillary Clinton, hold on to your butts, this is important!

As a father of a brilliant 8 year old daughter, I now know she can be ANYTHING she puts her heart in to…Even POTUS https://t.co/DckyWz1XcM

As the father of a young daughter, thank you @HillaryClinton.

Clinton isn’t the only topic men who are now fathers of daughters (or sons of mothers, or brothers of sisters) have become interested in.

@sullivanradio as a father of a daughter going to college this year, the judge needs to be charged as an accessory after the fact at a min!

Fathers of daughters (aka not all men) have even begun signing a pledge “committing to at least one of the following activities to demonstrate your commitment to advancing women and by default advocating for your daughters future” as part of the Father of a Daughter Initiative. Activities include listening to female coworkers about their experiences, not speaking over women in meetings, and supporting gender pay equity. Thanks, dads!

As usual, writer Mallory Ortberg skewered the trope best in her piece “As a father of daughters, I think we should treat all women like my daughters”:

It didn’t always used to be this way. I used to only have sons. Things sure were different then. How merrily I used to drive down country lanes in my old Ford, periodically dodging off-road to mow down female pedestrians (you must remember I had no daughters then). Was what I did wrong? How was I to know? I had no daughters to think of.

It is obviously not a problem that men want to support women, or that dads want to make the world a better place for their daughters. But from the sound of it, you’d think these men never gave a thought to feminism or women’s rights until they had a personal stake in it in the form of their children. And, sadly, that’s probably the case.

Most of all, it’s important for men to realize that women are people outside of their direct family circles—because, likewise, it’s important for women to feel like men care about their equality even if they’re not blood related. Even if you don’t have a daughter, or a mother, or a sister, or a wife, women matter because they comprise more than 50 percent of the population, and what affects them affects the whole world. If it takes having a daughter for you to have empathy for that many people, fine, glad you got on board somehow. But that is quite possibly the lowest bar to pass.