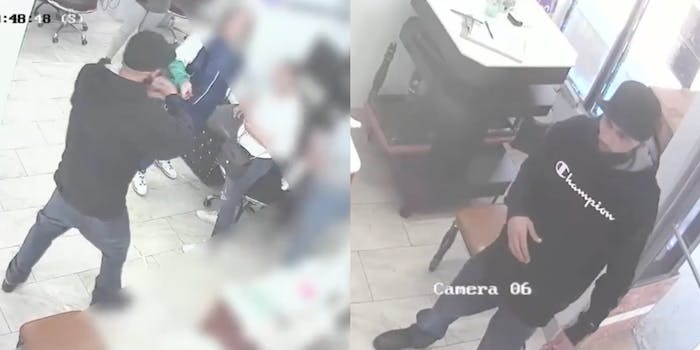 One bystander wielded a broom.

Update 3:57pm CT, May 2: The NYPD told the Daily Dot the man has been identified as 43-year-old David Gonzalez. The NYPD said Gonzalez was arrested and charged with sex abuse.

Initial story: New York police are looking for a man who allegedly sexually assaulted a woman at a nail salon—and who was fought off by a group of bystanders.

The incident took place at Sofia’s Nail Salon in East Harlem on April 27. According to police, the suspect followed a 21-year-old into the shop and pushed her against the wall before groping her.

Security footage shows the man rocking back and forth a few feet into the salon before charging forward toward someone or something off-screen. The video shared to Twitter then cuts to another camera angle, which shows the man facing off against a large group of people inside the salon.

He makes moves toward one of them, almost in slow-motion, as if he’s going to hit them, but he is easily fended off. Someone eventually approaches him wielding a broom, and he finally opens the door as if to leave.

Now, the New York Police Department (NYPD) is hoping the public will recognize the man from the video and turn him in.

But social media response to the incident has focused more on the good work everyone in the shop did banding together to protect the woman from the man assaulting her.

“This what east Harlem’s all about,” @FueledByYelyah wrote.

Conversely, it was barely more than a month ago that security guards in New York City were caught on camera doing absolutely nothing as an elderly Asian woman was assaulted right outside the door to the apartment building where they worked. At the time, the three were largely slammed online for not stepping up to help either during or after the attack.

The Daily Dot has reached out to the NYPD.