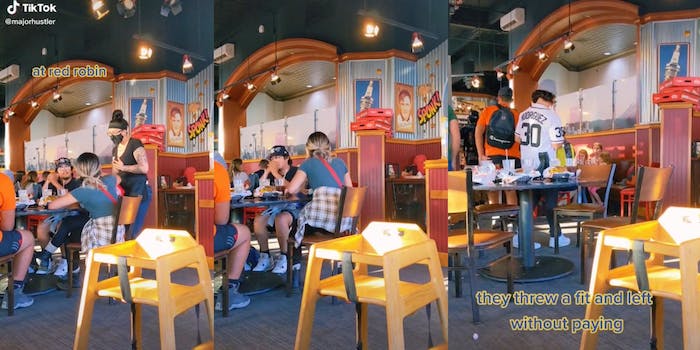 ‘They threw a fit and left without paying’: Group argues with Red Robin waitress in viral TikTok, allegedly makes her cry

‘They planned it from the start.'

A small group went viral on TikTok for allegedly “throwing a fit” at a Red Robin.

In a video posted to TikTok by @majorhustler, which now has 46,000 likes and 1.1 million views, four teens, or young adults, are seen sitting at a table, having finished a meal and arguing with a waitress. After asking her if she is the manager and telling her to “get the fuck away,” they get up and leave.

That’s where the video stops.

“They threw a fit and left without paying,” text overlay on the video reads. It was filmed by another customer sitting near the group.

Comments on the video center around what happens to the waitress in this situation. Some wondered if the video painted a full picture, as the clip started at the end of what appeared to be an argument in full-swing.

“Maybe put some context behind it?” one commenter wrote. “Idk what to think. They didn’t touch their food but tried to act hard asf when all of them stood up 5’4″.”

The poster, @majorhustler, shared that after the video, the waitress went into the back and “cried it out.” The TikToker said he was also seated in her section and gave her “a very nice tip.”

He said the reason this happened in the first place was because one of the individuals in the group “didn’t like her food or something.”

However, a commenter claiming to be a member of the group in the video said that’s not how it happened at all. They wrote that the video paints a false picture, that they did pay and were kicked out for another reason.

“U can see the waiter holding to go boxes bc they were kicking us out for a dumb reason,” @alvaradoreyes22 wrote. “We did pay. Guy in the glasses payed for our meals. She wasn’t being rude bc she didn’t like her meal it’s bc we were getting kicked out for something stupid.”

The Daily Dot has reached out to Red Robin, the poster @majorhustler, and @alvaradoreyes22.