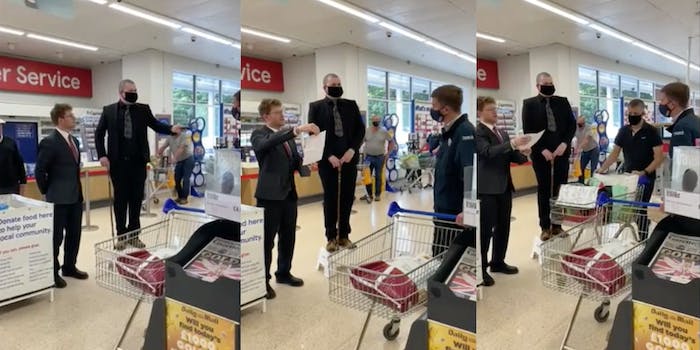 This is certainly one way to quit a job.

Often, when people make a big scene about quitting their jobs, it’s out of frustration and dissatisfaction, one final “good riddance” to the people who they believe have made their lives unbearable. This seems particularly true if that farewell ends up going viral on social media.

But despite appearing to harbor no serious ill will towards his employers, when u/s1mps0n24 decided to leave his job of six years, he opted for a dramatic moment all the same—and shared it to r/Funny on Reddit, of course.

“After telling my work that I am leaving, they said I must make a formal resignation letter,” he wrote, alongside a video showing just how literally he took that directive.

The footage starts off with him stepping up onto a small foot stool at the front of Tesco, dressed to the nines. He hands a black envelope to another suited up man next to him, who reads it out loud even as customers continuing walking through the frame.

“To whomever it may concern: I write this letter from a place of sorrow and regret,” he reads. “These six long, arduous years have caused me to grow quite weary. Whilst I have reveled and labored with my subordinates, my knees have grown weak, and the grease on my elbows hath depleted. This is not for every man to accept large packages into their backdoor. Nevertheless, it was my duty.”

He continues with particular thanks to individual managers, including “Steve, the emperor of this fine establishment.”

“You have raised the bar for your predecessor infinitely. To say his name will be remembered is a grotesque overstatement,” the letter reads. “I finish this letter with many thanks to my former comrades, and I hereby submit my formal resignation.”

The former employee then hands over the letter to a third man who has been patiently waiting throughout the whole speech — presumably his manager — with a cry of “Viva la Tesco!” followed by a casual “Alright, see you later” as he steps down from his platform.

The grandiose moment went over well with redditors, many of whom celebrated the former employee for keeping his composure while his friend read out the whole letter.

“The little cane bump had me laughing,” said one viewer.

As amazing as the formal resignation was, people were also surprised that customers didn’t stop to enjoy the show, but instead just went on shopping as if absolutely nothing out of the ordinary was going on.

“Dude needs the trumpet players they had back in the day to announce royal decrees,” u/LouSputhole94 suggested.

All the same, it was undoubtedly a memorable way to quit for everyone involved.