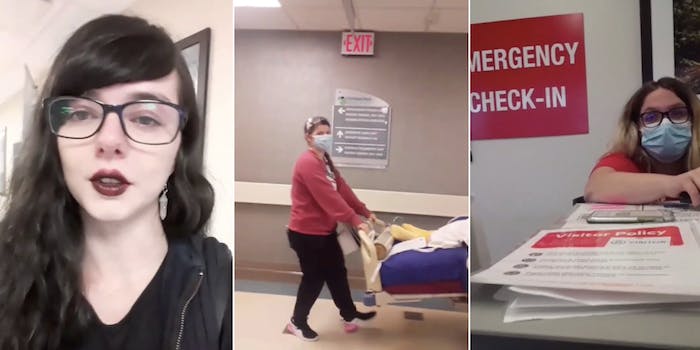 Just when you thought you had gotten your Karen-spotting down to a science, a new specimen emerges to throw everything for a loop.

Bucking the trend of Karens looking like Vineyard Vines models left out in the sun too long, a “goth” (a.k.a. black hair and plum lipstick) Karen recently set out on a quest to prove COVID-19 is a hoax. She did so via the extremely scientific method of walking around a hospital unmasked for several minutes and recording her findings, which were later posted to the r/iamatotalpieceofshit subreddit.

Karen’s COVID exposé amounts to little more than her wandering the halls of Kansas’ Overland Park Regional Medical Center and making small talk with various masked hospital workers. Nobody in the video tells Karen to wear a mask, which she interprets as proof that COVID-19 is a hoax and that nobody actually cares about the virus.

Never mind that these people are, you know, doing their jobs while Karen takes a leisurely stroll around the facilities during work hours, and they’ve probably grown wise to fake-nice opportunists who film social interactions in the hopes of baiting strangers into public meltdowns. Walking around a hospital to own the sheeple is very cool and good.

For her grand finale, Karen interrogates the woman behind the check-in desk.

“So I was wondering, like, you guys are pretty overwhelmed with the COVID deaths, right?” she asks. “The numbers are rising, so I bet you’ve had a lot of patients come in.”

“I can’t really talk about it,” the employee responds.

“I was just walking around the hallways, like, wow, it’s so quiet,” Karen continues. “I thought I would at least hear a crying nurse or two.”

When Karen’s bafflingly tone-deaf questions get no response, she bids the employee farewell and leaves the hospital. She has proven literally nothing—but she believes she’s proven everything.

“Not a SINGLE doctor, nurse, or staff member requested that I wear a mask. Why? Because this whole thing is a HOAX, and you’re a mindless herd member if you’re not seeing through this bullshit,” Karen wrote on Facebook, where she also shared her video. (The Daily Dot has withheld her Facebook.) “I was allowed into the nearky [sic] empty ICU and was not ordered to wear a mask. If that isn’t questionable to you, you may as well carve out your brain and use that unused space as a fanny pack.”

This is not Karen’s first go-round with baseless conspiracy theories. In June, she shared a text post on Facebook implying that George Floyd’s death was a “hoax,” despite sharing several anti-cop, anti-racist, and pro-socialist memes a week earlier.

You’ve got to hand it to Goth Karen: She’s a wild card when it comes to the sociopolitical ideologies and conspiracy theories she harbors. Unfortunately, the allure of recording oneself pestering strangers in public is too great for even the staunchest Facebook leftists to resist. The brain worms come for us all eventually.