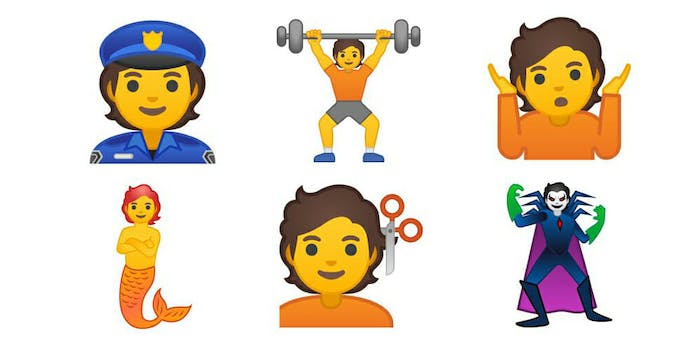 Google has revealed a set of 53 emoji that are designed be neither male or female, in a move the company says the future of emoji design.

Over the past few years, many emoji updates and releases have been focused on inclusivity. Expansions in representation have included a larger skin tone palette, the addition of same-sex couples, and more emoji to represent people with disabilities. While some of this has been done by Unicode, Google is taking the first step toward gender inclusivity, with 53 gender-ambiguous emoji.

“We’re not calling this the non-binary character, the third gender, or an asexual emoji–and not gender neutral. Gender neutral is what you call pants,” said Google designer Jennifer Daniel in an interview with Fast Company. “But you can create something that feels more inclusive.”

The non-binary people I know currently represent their gender through emoji in different ways. Some exclusively use emojis that are the “opposite” of the gender they were assigned at birth, some use different gendered emoji depending on how they’re presenting or feeling, and some (like me) tend to use a male and a female emoji together.

According to Daniel, the design team went in knowing that gender is complex. “It is an impossible task to communicate gender in a single image. It’s a construct. It lives dynamically on a spectrum,” she said. In the end, they settled on a design with chin-length hair and loose curls. They also incorporated genderfluidity in other ways, such as a merperson with their arms crossed over their chest, and a vampire with a collar chain rather than a bowtie or a choker.

Many critics of increased emoji inclusivity complain about cluttered emoji keyboards and endlessly bloated customization. However, Daniel sees a different future for emoji inclusivity. As much as possible, she hopes to make future designs simple and iconographic in such a way the emoji can represent all of the possible combinations of gender and race.

According to the Verge, the new emoji will be available on Pixel phones in beta later this week, and on Android Q phones later in the year.