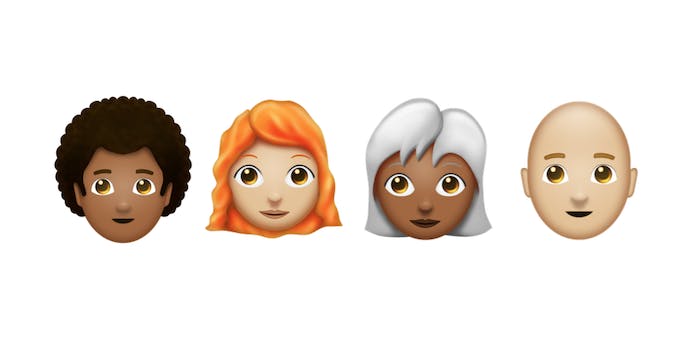 Here are all the new emoji we’re getting in 2018

It’s been mere months since the last time we got a new set of emoji in our lives. However, the Unicode Consortium is already giving us a first look at the emojis we can expect in 2018—all 157 them, including the redheaded emoji.

That’s right, this is going to be a blockbuster year for our expanding emoji libraries. The Emoji 11.0 set is officially “fixed and final.” Mobile and desktop OS makers such as Google, Apple, and Microsoft can now look at these design parameters and make customizations and tweaks for their own products.

For a ginger such as myself, the most exciting aspect of this update is the new redheaded emoji, which we got a preview of back in August. However, we’re also getting other top-of-head diversity, including bald, gray-haired, and curly-haired variants.

And no emoji update would be complete without some new animal friends. Emoji 11 includes llama, kangaroo, peacock, and lobster iconography. (The state of Maine is pretty excited about that last one.) The set also includes a microbe, which could certainly be useful now with this crazy flu season we’re having, and a test tube and Petri dish, for the chemically and biologically-minded. It also includes new food options such as a bagel, mango, and cupcake.

Since 157 is no small number of emoji, Emojipedia conveniently rounded up all the additions and updates into a convenient video, which you can watch below.

This latest emoji update also includes one other notable addition: a pirate flag. Some people are pretty excited about it.

Crafters are also thrilled that sewing and knitting emoji have made the cut.