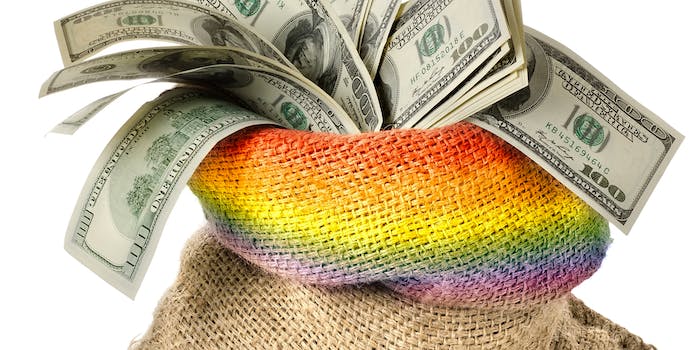 Here are 10 LGBT nonprofits you should donate to on #GiveOUTDay

It's Christmas for LGBT groups, basically.

Nonprofits, community centers, and other organizations that serve the LGBT community often start out with little besides a severe need and a few dollars straight from the pockets of volunteers.

Whether they help transgender people of color living in poverty or homeless LGBT teens; engage in research to prevent suicide or HIV infections; or build libraries that archive lesbian historical documents—LGBT organizations rely on donations and fundraising.

That’s why #GiveOUTDay was launched in 2013, raising more than $2.4 million across its first three years for over 500 organizations that serve the LGBT community. Run by 35-year-old LGBT fundraising group Horizons Foundation, the day is meant to introduce the idea of charitable giving into the community—and its allies.

“It would be hard to find an LGBT person who hasn’t, at one time or another, turned to an LGBTQ nonprofit at some point in our lives,” said Roger Doughty, the president of  Horizons Foundation, in a statement emailed to the Daily Dot.

But, said Doughty, research shows less than 5 percent of LGBT people donate directly to nonprofits that serve their own community’s needs.

“We can do better,” Doughty said.

Hundreds of advocacy groups are listed on the #GiveOUTDay donation website—searchable by category—but we’ve pulled out a few of our favorites to highlight. This list represents only a tiny portion of the many incredible organizations that rely on donations to serve the LGBT community.

During an election year, LGBT political action committees are a vital part of making sure that candidates from the community are supported and have the resources needed to fight against anti-LGBT legislation. The Victory Fund is the oldest LGBT political fund in the U.S., and its Victory Institute trains future political leaders for fellowships and internships in government. Donate to the Victory Institute here.

Gay-Straight Alliances, increasingly known as Gender and Sexuality Alliances, are school clubs that provide safety and community for LGBT children and teens—a demographic that faces school bullying and violence at higher rates than other groups. The GSA Network helps queer and trans kids organize clubs, trains student leaders, and even fights laws and policies that harm LGBT youth. Donate to GSA Network here.

SRLP provides much-needed free legal representation for transgender, gender-nonconforming, and intersex people. Many of SRLP’s clients face jail or deportation, or are homeless and struggling with shelter and other poverty issues. According to SRLP’s donation page, the nonprofit typically has a waiting list of 50–100 clients due to overwhelming need and lack of available resources. Donate to SRLP here.

The nation’s first 24-hour suicide prevention and crisis hotline for the transgender community, Trans Lifeline exists to try and lower the staggering rates of trans suicide—41 percent of trans and gender-nonconforming people have attempted suicide compared to just 1.5 percent of the general population. Donate to Trans Lifeline here.

North Carolina’s “bathroom bill” has dominated the news throughout 2016, as H.B. 2 is one of the most stringently anti-LGBT laws in the country. It has stirred a controversy that has seen businesses flee, boycotts multiply, and even a lawsuit brought by the federal government. Equality NC is the local LGBT group fighting for the rights of the North Carolina community, and this year it needs all the help it can get. Donate to Equality NC here.

Founded by an artist, TWOCC brings transgender women of color together to train for leadership, build community and support, and engage in arts and wellness programs—all while organizing and protesting the disproportionately high levels of violence against trans women of color. Donate to TWOCC on their website here.

Despite the law firm’s name, NCLR represents a wide swath of LGBT clients free of charge while also fighting for LGBT rights at legislative and policy levels—such as the Equality Act. NCLR attorneys are often at the helm of some of the most important Supreme Court cases affecting the LGBT community, all while serving more than 5,000 LGBT people and their families each year. Donate to National Center for Lesbian Rights here.

For LGBT seniors, life can be an obstacle course of unique proportions. Many lack family support, live in homophobic and transphobic assisted living environments, and are often afraid to come out after a lifetime of social and legal oppression. The nation’s oldest and largest nonprofit for LGBT senior citizens operates 29 chapters in various states—each offering support, community, and advocacy to local LGBT elders. Donate to SAGE here.

In more than 80 countries around the world, it is illegal to be LGBT. Many LGBT people in oppressive countries face the death penalty, imprisonment, or violence and threats at the hands of their communities. And for most of those people, the United States represents hope for survival and the opportunity to live openly for the first time. The LGBT Asylum Support Task Force helps settle LGBT refugees in the U.S., funding their housing, living expenses, trauma counseling, and legal representation. Donate to the LGBT Asylum Support Task Force here.