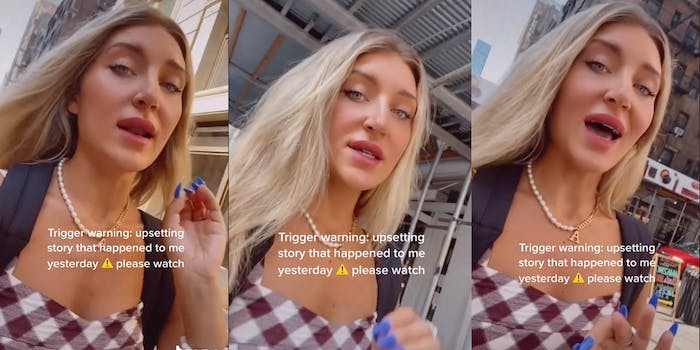 ‘Can’t simply listen to music without being in danger’: TikToker gives PSA about earphones after frightening encounter with man

'That is the SADDEST thing ever to hear.'

A New York TikToker shared a PSA in a now-viral video after a frightening encounter with a strange man.

TikToker @lyss shared her story on Thursday, one day after the encounter. Her video, which many people are treating as a PSA, quickly rocketed past the majority of her other uploads with more than 360,000 views and tens of thousands of likes.

Lyss informs viewers, as she wanders past crowded patios and storefronts, that they should never “wear your headphones while you’re walking somewhere.”

She says that a day before, her friend sent her a video on Instagram. She says she was fixated on the video while she headed back to her apartment from a Starbucks only a few blocks away. She says both her headphones were in, volume on high, and she was entirely focused on her phone, rather than her surroundings.

What she didn’t realize was the man following her, she says.

Lyss says that a good samaritan thankfully caught wind of the man, and began following Lyss as well. Lyss says the bystander attempted to get Lyss’ attention, to alert her to the man, but continually failed because Lyss was “so zoned in” on her phone.

Lyss says she managed to make it all the way back to her apartment and into the lobby, before she finally caught wind of the woman. Even then, she says it’s only because “(the woman) was excessively screaming” to get her attention. This, she says, finally urged Lyss to remove her headphones, but the man had already entered the lobby behind her. Not only had he gained access to the building, but Lyss notes that he appeared to be “holding something in his pocket.”

The second Lyss turned around, however, she says the man fled. She says he was back out the door in a moment, leaving her frightened and confused about the situation.

Thankfully, Lyss’ apartment complex is working to make her feel safe. She says it has security cameras in the lobby, which caught sight of the man and got police involved in tracking him down. Lyss says that this is one of the “scariest things” that has ever happened to her and notes that the whole situation has left her traumatized.

“I don’t even want to walk outside in New York without having a friend near me or someone next to me,” she says.

Thanks to the woman, who Lyss refers to as her “guardian angel,” Lyss made it out of the situation safely. But, as noted by multiple commenters, “so many people get mugged this way.” And, while Lyss gave her advice specifically to those wandering the streets of New York City, people also noted that this advice remains true regardless of what city you’re in.

And a number of commenters noted how “sad” it is that women can’t even listen to entertainment via headphones without having to worry about getting harassed. “That is the SADDEST thing ever to hear. Can’t simply listen to music or anything without being in danger! Ugh NY,” one said, to which Lyss replied: “I know ugh it’s insane.”

“It’s so sad us women have to do this,” another said.

Lyss made it out of her situation safe and sound, and is already back to making her typical video fare. Plus, with her PSA coasting on its viral status, her message is almost certain to reach at least one or two viewers who may need it.

The Daily Dot reached out to Lyss.