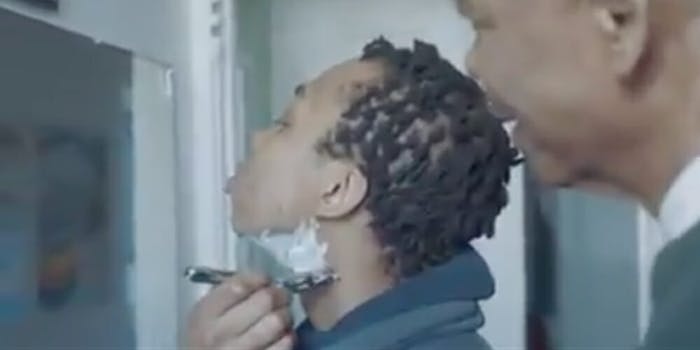 The Mask You Live In/Twitter

'My transgender son and I watched this together.'

Gillette has become a pioneer in reimagining and redefining masculinity. In its latest move, the company dropped an ad showing a father teaching his transgender son how to shave.

“I always knew I was different, I didn’t know that there was a term for the type of person that I was,” says the boy, identified as Samson Brown by Gay Star News, at the beginning of the video. “I went into my transition just wanting to be happy.”

The ad shows the father, who admiringly looks at his son, directing him as he puts a razor to his cheeks.

“Now, don’t be scared,” the father says. “Shaving is about being confident.”

The ad–which dropped on Thursday–gave people all sorts of feels, especially among the Black trans community.

As a black trans man who works in advertising, this is… Everything.

Well done to @Gillette and the creative team behind this.

This is the kind of work I dream of creating some day.https://t.co/UaoOEtCD9Z

This is genuinely lovely. It’s an ad campaign, yes. But it’s thoughtful and earnest. Thankful for that

As a black trans man who works in advertising, this is… Everything.

This is the kind of work I dream of creating some day.***https://t.co/VTXa6Aw0N0

“We’re taking steps to be more inclusive with how gender is represented in our marketing,” the brand wrote.

Oh wow, ⁦@Gillette⁩, we are having all the feels here. As the first and largest organization for parents of #LGBTQ people we thank you for seeing our #trans kids…and for honoring their affirming #dads! https://t.co/BYuOwLhEBf

Many applauded Gillette for taking such a strong, inclusive stance–even if it’s a marketing strategy.

Sure, it's a corporation going after that all mighty dollar but there is something to be said when major corporations don't GAF about right wing backlash and make inclusive ads like this. So good on, Gillette https://t.co/m45ib56iUJ

This ad is especially important right now, given that three Black trans women were recently murdered. The Trump administration also moved to end a policy that prohibits healthcare discrimination based on one’s gender identity–which poses a massive threat to the healthcare of the trans community.

After a sickening, dangerous week for trans rights… for @Gillette to put its brand into backing acceptance of trans men as men like this… wow. I know it’s marketing, but wow. https://t.co/QqKHIjpMTU

Why can a razor company understand the need to give my community dignity but not my gov't?
Gay Star News: New Gillette ad features dad teaching his trans son to shave for the first time.https://t.co/Pj3GSq9AZL

This week, the Trump Admin. legalized discrimination against transgender patients and homeless people

Meanwhile, Gillette has released an ad of a father teaching his trans son how to shave for the first time.

Progress comes in the most unlikely places. https://t.co/OYG2vEhb2b

It also proved to be an important moment for parents and their trans children.

“My transgender son and I watched this together,” a Facebook user wrote. “He can’t wait to learn how to shave, once he grows facial hair. Thank you for being part of the social conversation. This brings me happy tears!”

This is how every parent should treat their LGBTQ kids. Love and support. Kudos to Gillette for their gutsy campaign! https://t.co/gUm35Pc91d

Earlier this year, Gillette released an ad about toxic masculinity, highlighting the need for our society to rethink the “boys will be boys” narrative. It drew tantrums from some cis men–which is probably a good indication that Gillette was doing something right.

This ad has also received some backlash in the form of homophobic comments on Twitter, but for the most part, people are simply celebrating the visibility of trans children.