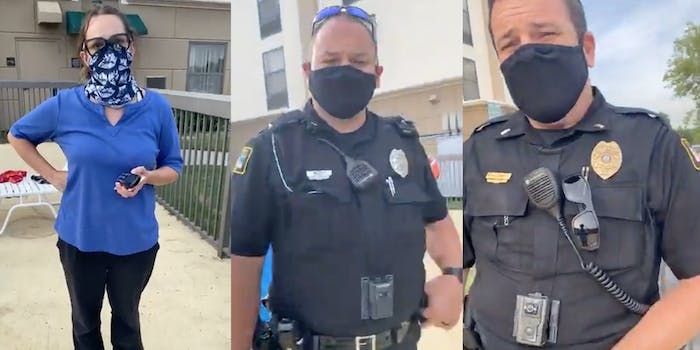 She didn't believe the family was staying at the hotel—despite seeing their key.

Yet another entry has been submitted into the ‘white people who have zero chill‘ category for next year’s Oscars. The competition is going to be fierce.

A video of a white woman calling the police on a Black family has been circulating online. The white woman—dubbed ‘Karen’ by the internet at large—has lost her job over the racist incident.

The video was posted to Facebook by the woman behind the camera, Anita Williams-Wright. She was on a business trip and staying at the Williamston, North Carolina Hampton Inn, where the incident took place. When she took her kids to enjoy the hotel’s pool, an employee approached them. The white woman asked if Williams-Wright was a guest at the hotel. She confirmed she was a guest. That should have been the end of it.

Unfortunately, it was only the beginning. When Williams-Wright refused to inform the employee of her room number—instead opting to show her a working room card as proof—the employee called the police.

In the video, which begins not long after police have arrived, Williams-Wright notes that a white couple, who had also been enjoying the pool when the employee entered, had not been questioned. They’d been allowed to leave the area without any interference. Williams-Wright’s family was another story.

Williams-Wright notes in the video that she believes the employee’s actions to be discriminatory. Despite the questioning and accusations, Williams-Wright remains calm and in control. She did not give officers her name or room number.

“I do not have to give my identity. I did not break the law,” she said.

She repeatedly lays out the details of the situation, including the fact that neither of the two officers bothered to ask for her side of the story. After she showed them her room key, they still decided to run her plates.

The nearly 10-minute video is an exercise in patience on Williams-Wright’s part. She continues to deal with officers and the employee while keeping a careful eye on her children.

Williams-Wrights also explained to officers that the employee told her, “people like you come here and get in the pool and don’t have a room here.”

In response to the incident, the Global Head of Hampton by Hilton made a statement.

“Hampton by Hilton has zero tolerance for racism or discrimination of any kind,” Shruti Gandhi Buckley said. “On Saturday, we were alerted to an online video of a guest incident at one of our franchise properties. We moved quickly to identify the hotel and the guest so that we could make contact and review the matter.”

Buckley noted that she reached out to the Hampton in question and “learned that the team member is no longer employed at the hotel.”

The Daily Dot reached out to Williams-Wright.