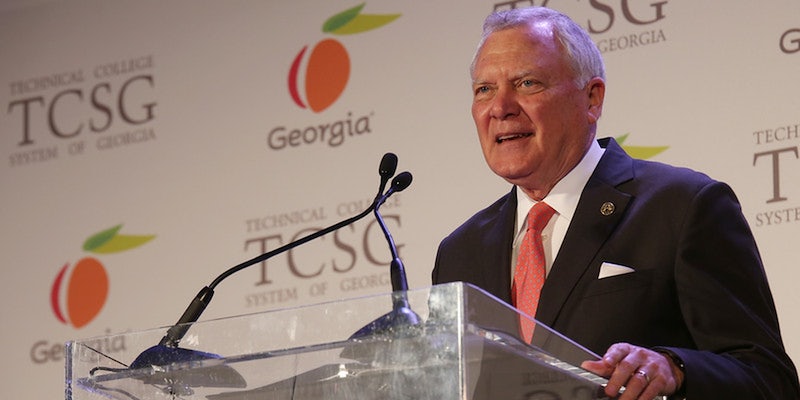 'I do not think we have to discriminate against anyone to protect the faith-based community in Georgia.'

In a detailed and passionate speech, Deal stated his reasons for vetoing House Bill 757 (H.B. 757), which passed the state legislature on March 16, saying that the separation of church and state is already in place and “is best left to the broad protections of the First Amendment of the United State Constitution.”

In light of our history, I find it ironic that today some in the religious community feel it necessary to ask government to confer upon them certain rights and protections. If indeed our religious liberty is conferred by God and not by man-made government, we should need the “hands-off” admonition of the First Amendment to our Constitution. When legislative bodies attempt to do otherwise, the inclusions and omissions in their statues can lead to discrimination, even though it may be unintentional. That is too great a risk to take.

Deal’s comments come on the heals of a federal lawsuit, filed Monday, that challenges a similar anti-LGBT law in North Carolina.

Deal, a Republican, called to task the sections of the bill that use religious belief as a cover for discrimination, saying that it did not reflect the “character” and “warm, friendly, and loving people” of the state of Georgia. He warned against business leaders who had made threats of leaving the state over their opposition to the discriminatory bill, likely a direct rebuke to Disney, the NFL, and the NCAA, which were among the hundreds of businesses speaking out against the bill.

“I do not respond well to insults or threats,” the governor said at Monday’s press conference. Regardless, Deal said he would veto the bill due to his own “sound judgments based on solid reasons that are not inflamed by emotion.”

Gov. Deal also clarified that, to his knowledge, no faith-based business or individual within the state had ever been forced to provide services to LGBT clients. He cited examples from New Mexico and Colorado in which those states’ Human Rights Act and Public Accommodations Act, respectively, mandated that all businesses serve the LGBT community.

“It is also apparent that the cases being cited from other states occurred because those state had passed statues that specifically protected their citizens from adverse actions based on their sexual orientation,” said Deal. “Georgia has no such statues.”

Passing a religious freedom law specifically allowing discrimination was unnecessary in a state that did not already offer non-discrimination protections to the class of people in question, Deal said. He also referred to a strong statewide religious base, saying, “Our cities and countryside are populated with people who worship God in a myriad of ways and in very diverse settings.”

“I do not think we have to discriminate against anyone,” Deal said, “to protect the faith-based community in Georgia.”