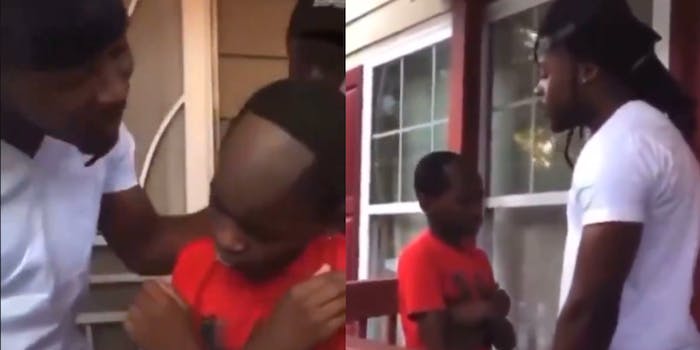 'Now we gonna show them you getting your ass beat.'

This article contains content that readers may find disturbing.

A video of a young boy being slapped on Instagram Live because of his sexual orientation has sparked outrage online.

“Now we gonna show them you getting your ass beat,” says the woman recording the incident.

The young boy, reportedly named Tyler, from Atlanta stands with his arms crossed over his chest with the side of his head shaved with the word, “GAY.”

At least four people stand around him with two men in frame of the video. The man wearing white has his hand wrapped around the back of Tyler’s neck. Two of the people in the video have allegedly been identified as the boy’s relatives.

“You say you’re what?” one of the men asks Tyler, apparently referring to his sexuality. Tyler replies, “Nothing,” which the man tells him to repeat.

“And he like this shit,” a woman says in the background.

Tyler continues to stand in a protective position and looks visibly upset.

“You still doing gay shit” the man says. “You think this on the side of your head for no reason.” The man proceeds to hit Tyler’s head and later pushes him, causing Tyler to almost fall backward.

A woman in the background says, “You like this type of stuff,” after which the man punches Tyler in the arm.

People online are both angry and heartbroken over the video.

“I can’t share the video of that Black child being abused and humiliated,” one user wrote on Twitter. “It triggered me and is triggering. It’s been said before, but if you are deeply invested in determining your child’s gender or sexuality for them, do not have children.”

The user shared that they have worked with queer and transgender people for years and have seen the lasting, harmful impact parents can have on their children regarding gender and sexuality.

“It’s too common and there is rarely accountability,” the user wrote. “And if you think there is a wide enough safety net to catch them, to prevent outcomes that love and affirmation at home could’ve, no.”

Terence Stewart, president of Atlanta Black Pride, a nonprofit organization serving the Atlanta LGBT community, told the Daily Dot that LGBT youth that are surrounded by people who make them feel unsafe or unprotected can lead to suicide or put youth at risk for homelessness.

“So often in the Black community, we’re not given the tools that are needed to identify or understand [gender or sexuality],” Stewart said. “There is no doubt from this video that this is not the first time this child has gone through this.”

Stewart said that much of the pushback against queerness in the Black community comes from the Black church and stigma around the LGBT community.

“We try to dig into that with the parents to get them to understand that their support will help [LGBT youth] go a long way,” Stewart said. “But your rejection and constant belittling will destroy whatever self esteem they have left. When they enter into society, they enter as a broken person.”

Others online are reaching out on Tyler’s supposed Instagram, sending direct messages of support or leaving comments on his photos. The validity of the account has not yet been confirmed, but it now has over 35,000 followers.

“You are loved,” one user commented. “Be strong in this struggle. You are gonna come out on the other side a KING!!” God loves you and so do I.”

However, it appears that comments are being deleted on the post.

In response to the incident, people are demanding that Child Protective Services (CPS) get involved and are warning of supposed fake Cash App accounts allegedly trying to profit off the situation. According to @mylifeas_marko on Instagram who claimed to know the boy personally and posted a recording of the incident, both the police and CPS were contacted.

The Atlanta Police Department told the Daily Dot that the department has not been aware of a criminal complaint but that an investigator is currently looking into the incident.

“Needless to say, the description of the event is distressing and our Special Victims Unit and the commander of the LGBTQ Liaison Unit are aware of the existence of the video,” the Atlanta Police Department told the Daily Dot.

However, Stewart said contacting Child Protective Services or the police is not a simple solution.

“He becomes another Black kid in the system,” Stewart said. “He will get lost in the system and still have to try to navigate his way because even being in foster care does not guarantee a safe, secure environment.”

Stewart said reaching parents of LGBT youth is all about understanding where their beliefs come from, but holding them accountable to provide a safe space for their child.

“What you do has an everlasting effect on your child and your community too,” Stewart said.

A video of Tyler on Instagram Live saying he was “good” was posted online after the incident.

“My brother and them, they didn’t abuse me,” Tyler says in the video. “They were just showing me like you need to stop doing that.”

But a voice in the background can be heard saying, “Say it [N-word],” before the boy speaks.

Update 6:46pm CT June 21: In a statement to the Daily Dot, the Atlanta Police Department said:

“On 6/17/2021, the Atlanta Police Department’s Special Victims Unit became aware of a social media post depicting maltreatment of a juvenile. SVU investigators began working to identify the location where the activity occurred and to identify the juvenile and all parties involved. Investigators were able to find the incident location and identify the juvenile and he was placed in the care of the Georgia Division of Family & Children Services (DFCS) on the evening of 6/18/2021. At this time, we are working closely with DFCS and the investigation continues.”