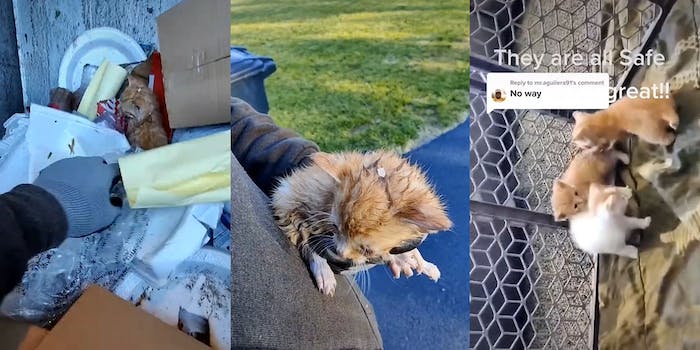 ‘Makes me sick to my stomach’: Garbage collector rescues 3 kittens from trash compactor

'Garbage collection is such an under appreciated job.'

In a viral TikTok video, a garbage collector rescues three kittens he found in the trash, leading to an outpour of support from viewers.

“Well, here we go with the chronicles of a trash man,” Terry, user @turboterry77, says while reaching into the trash pile at the back of his compactor truck to pull out a crying kitten.

He goes back to retrieve another kitten meowing from the trash pile. “That’s why I double check. There’s another one.”

The TikToker says in the caption that he pulled out a total of three kittens. In the video, he’s seen placing the dirt-covered animals in the passenger seat.

His initial video, shared May 10, received over 12.7 million views and both shock and praise from other TikTok users.

“Thank you for doing this, such a beautiful deed,” one user wrote.

“Makes me sick to my stomach. Thank you for saving them,” another said.

“Garbage collection is such an under appreciated job. Thanks for being amazing,” a third viewer wrote.

In a comment, Terry said animals are dumped in the trash more often than people think. “Unfortunately this happens alot. Not many times are they heard to be saved,” he wrote.

In a follow-up video, Terry shared the full story.

He reiterates that situations like these happen frequently. “Sometimes its on purpose. Sometimes it’s an accident. Sometimes you’ll just never know what the situation was,” he says.

He says he wasn’t sure which home the kittens had come from, since he didn’t find them immediately. In this case, he wasn’t able to report whoever had dumped the animals.

Continuing the story, Terry says he was on the phone with one of his co-workers when he heard a high-pitched muffled noise that sounded like “a smoke detector underwater.” He then noticed that a bag was moving and knew there must be an animal in the trash.

After finding the three kittens, he says he extensively searched the back of the truck to ensure he had found them all. He even shut off the truck to see if he could hear any more noises.

After turning the kittens into the Humane Society of Lebanon County, Terry says they are now in a foster home. They are living with a mother cat that also has a kitten around the same age, who has taken them in as her own, he notes.

He added in the comments that their names are Ginger, Cinnamon, and Clover.

“I shouldn’t get attention like this for something that should’ve never happened,” he says. “You guys are just as much of heroes as I am,” he continues, thanking viewers for their support and donations.

Terry also urged viewers to donate to the humane society and included a link to donate in his bio.