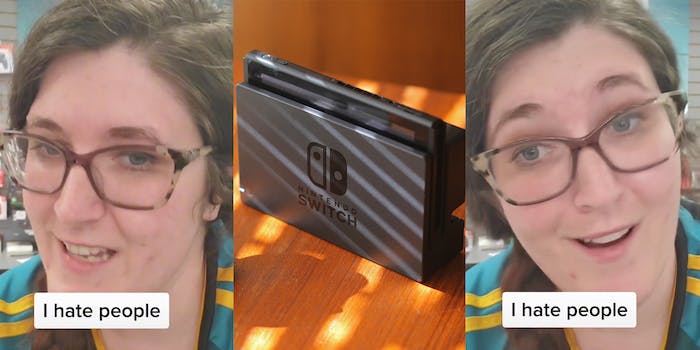 'It was almost a brand new Animal Crossing Switch and guess what she wanted?'

A TikToker’s account of their exchange with a customer at GameStop has drawn more than 146,000 views on the platform.

In the video, Sarah Beth Redlhammer (@voomaid) says the customer wanted to trade in a new Animal Crossing-themed Nintendo Switch for the same exact console because it was one year old.

“There’s nothing wrong with it, but I had to take off the screen protector because it had a crack in it,” Redlhammer says in the video. “So it was perfectly fine. I’m like, yo, why? And then she complained about the price difference between trading it in and buying a new one.”

While Redlhammer suggested the customer purchase the OLED Switch model, the woman allegedly said she couldn’t justify the price difference between her current model and the newer one.

“I’m like, there is literally no point in you buying a brand new Switch when you already have one that’s a year old with absolutely no issues,” the GameStop employee continues.

“Apparently, after she walked out with no issues, she called corporate saying I broke her screen protector. What are they going to do about it?” she questions in the video. “What the fuck?”

During the phone interview, Redlhammer said she was not disciplined once she made it clear that the screen protector was broken because the customer brought it in for a trade.

She said the screen protector only cost around $10, and the customer took over a week to pick it up. Redlhammer also reiterated that there was no discernible issue with the console, only that the woman wanted to trade it in for a new one.

“I didn’t understand at all why she wanted to trade this Switch,” she said. “It was in perfect condition. I mean, we don’t have a way to test like batteries and stuff. So maybe the battery was shot or something. But everything seemed to work fine. She even had the box.”

Some viewers in the comments suggested the customer was attempting to “game the system” to get a new screen protector for free.

“So her goal was to get a new screen protector cause she messed up the old one,” one commenter wrote. “It’s the long game.”

“She was basically trying to get a new one for a screen protector when she could (have) just went on Amazon and bought a new protector so damn easy and (cheaper) I wish I had a Switch but it’s very expensive,” another commenter wrote.

“She probably paid more in gas to drive up there than to buy a new one on Amazon for like $8,” a third said.

In her time making videos as a GameStop employee, Redlhammer said viewers offered feedback that was unhelpful or accused her of being in the wrong in the situation, mirroring some of her in-store experiences with customers.

“A lot of people will personally like yell at me (about) Game Stop,” she said. “People will be like, ‘you’re stupid. You’re the Karen. Why are you there? If you don’t like it, why don’t you just quit?'”

Redlhammer said she began working at GameStop at the height of the COVID-19 pandemic, and will soon move out of the country to pursue a master’s degree overseas.

Others shared their own experiences of previously working for Game Stop, with some empathizing with Redlhammer.

“I had a customer call corporate on me because I wouldn’t sell them a game that wasn’t out yet until November,” one commenter wrote.

“I had a dad once who wanted a new switch cuz his kids convinced him the joycons weren’t suppose to detach from the system,” another commenter wrote.

“I worked for Game Stop for seven years as a manager,” a commenter wrote. “My heart is with you lol.”