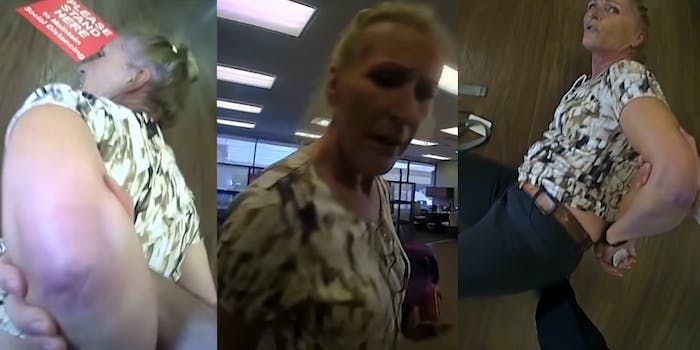 ‘What are you going to do? Arrest me?’: An anti-mask Karen to a cop right before getting arrested at bank

The woman is claiming to be a victim of police brutality.

An anti-mask woman in Texas is claiming to be a victim of police brutality after being arrested for refusing to leave a bank.

The incident began on Thursday when the woman, later identified as 65-year-old Terry Lynn Wright, declined to wear a mask while inside a Bank of America in the city of Galveston.

After repeated attempts to get Wright to leave the premises failed, according to local outlet KHOU 11, the bank’s manager resorted to calling law enforcement.

Footage of the incident, captured by the responding officer’s body camera, begins with Wright falsely claiming that she is not required to cover her face after Texas repealed its mask mandate earlier in March.

Despite the officer explaining that Bank of America still retains the right as a private business to require masks, Wright continues to refuse to leave.

Clearly frustrated with the situation, the officer lets Wright known that they can leave the bank “the easy way or the hard way.”

“What are you going to do? Arrest me?” Wright asks.

After being told that she will be arrested for trespassing if she does not vacate the bank, Wright accuses the officer of “having issues” and taking away her “human rights.”

The officer responds by pulling out his handcuffs, causing the woman to begin backing away while repeatedly asking whether she will be shot.

But when the officer goes to grab Wright’s wrist, she pulls away. The officer calls for backup and proceeds to take the woman down to the ground.

“Do not touch me!” she says while fighting the officer. “Who do you think you are?”

Once on the ground, the woman continues to resist arrest while asking other customers if they are going to “get real” and intervene.

Despite being silent up until that point, the other customers can all be heard shouting “no” in disagreement with the woman’s claims of police misconduct.

“Wow, what a bunch of sheep!” the woman responds.

While being taken outside, Wright resorts to accusing the officer of breaking her foot.

The woman was treated for minor injuries and later released by a nearby hospital. Police say they have since issued an arrest warrant for the woman and have charged her with criminal trespass and resisting arrest.