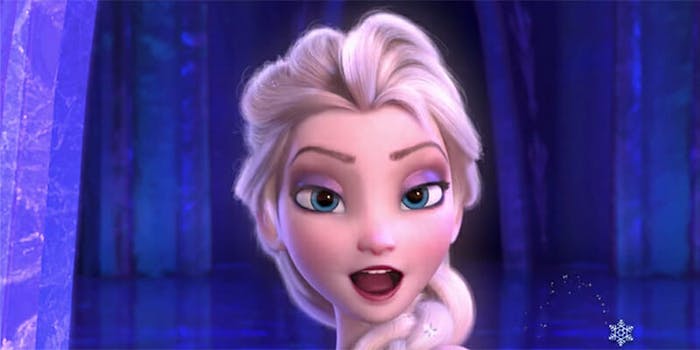 A vague statement from writer and director Jennifer Lee is giving Disney fans hope that ice queen Elsa will have a girlfriend in the coming Frozen sequel.

Fans have been vying for queer representation with Elsa for a long time. Three years ago, a petition called “Make Queen Elsa a Lesbian” had 2,600 supporters, and the movement had renewed support when #GiveElsaAGirlfriend went viral on Twitter. Even Idina Menzel, the voice of Elsa, supports the idea.

Lee tentatively acknowledged the wishful thinking in an interview with the Huffington Post on Monday.

“I love everything people are saying [and] people are thinking about with our film—that it’s creating dialogue, that Elsa is this wonderful character that speaks to so many people,” Lee said. “It means the world to us that we’re part of these conversations.”

The statement wasn’t so much a confirmation that we’ll see Elsa in a lesbian couple so much as recognition of the fans who cling to any hope of seeing LGBTQ representation in Disney films (remember the hype over a possible lesbian couple in Finding Dory or the controversial gay moment in Beauty and the Beast?).

“Where we’re going with it, we have tons of conversations about it, and we’re really conscientious about these things,” Lee continued. “For me … Elsa’s every day telling me where she needs to go, and she’ll continue to tell us. I always write from character-out, and where Elsa is and what Elsa’s doing in her life, she’s telling me every day. We’ll see where we go.”

But even if fans don’t get the ice queen lesbian fantasy they want in a Frozen sequel, maybe Disney will finally learn to drive the conversation around LGBTQ representation—not just listen to it.