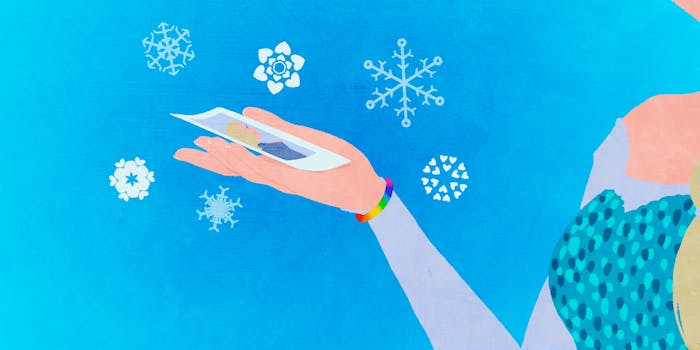 A high school ‘Frozen’ fan is determined to #GiveElsaAGirlfriend

This teen wants to see herself represented. Will Disney listen?

Anyone who’s ever seen a Disney film knows how campy they can be.

From butch queens like The Little Mermaid’s Ursula—who was legitimately based on famous drag queen Divine—to swishy little fairies like Jafar from Aladdin (girl, please, he’s not fooling anyone), the queer undertones among Disney characters have been an open secret in the LGBT community for years. And let’s not even get started on the number of Disneyland and Disney World cast members who are trolling for hot gay action on Grindr.

But Disney has yet to acknowledge its queer fan base with an openly gay, bisexual, or transgender character. And a new online movement—started by a high school senior—could change that.

When 17-year-old Alexis Isabel Moncada mused about the film Frozen’s subtle lesbian tendencies and tweeted at Disney late Saturday night to #GiveElsaAGirlfriend, the response was immediate and enthused.

Moncada, who identifies as a bisexual Latina and also runs the popular blog Feminist Culture, told the Daily Dot that she thinks a lot of people already view Frozen’s plot as a coming-out story. And even more people are frustrated by the fact that there has never been an LGBT Disney character.

“Honestly, it bothers me a lot,” Moncada told the Daily Dot, “because I know there are lots of girls out there, including myself, who have been so confused as a child about their feelings.”

She’s hardly alone. In less than 24 hours since Moncada started the hashtag #GiveElsaAGirlfriend, it was used in tens of thousands of tweets and retweets.

I fully stand behind this. There NEEDS to be representation in children films. Thanks @lexi4prez for the gr8 idea#GiveElsaAGirlfriend

The reaction has stunned the teen who started it all.

“I really didn’t think it would ever get this popular,” said Moncada. “It’s amazing to see so many people want LGBT representation.”

Disney has yet to respond to the viral campaign, but the conversation that Moncada initiated is bigger than just one powerhouse Hollywood studio. The lack of LGBT characters in media directed at children and young adults is palpable—and worrisome, considering recent polls that show less than half of teens aged 13 to 20 identify as heterosexual.

Kids aren’t the only ones suffering from a sense of media alienation. On Monday, GLAAD released the results of its annual Studio Responsibility Index—which not only showed no increase in LGBT movie characters, it also showed a decline in LGBT racial and ethnic character diversity.

To add to the lack of representation, the heightened levels of anti-LGBT discrimination are clear just by scrolling through the #GiveElsaAGirlfriend hashtag—where trolls have inserted countless homophobic and transphobic comments directed not only at the teen girl who launched the idea, but at the LGBT community at large.

So where does a young bisexual Latina turn when she wants to see herself reflected as a princess? So far, the only queer princess in mainstream media is the bisexual Mulan starring in ABC’s Once Upon a Time. And while Disney’s first Latina princess, Elena, makes her debut this year, it’s unclear whether she prefers the love of a prince, princess, or both.

“We’re portraying princesses as this one form, even though every girl can be a princess,” Moncada told the Daily Dot. “If I would have had that kind of representation as a kid, I wouldn’t have felt so alone in it.”

Disney had better watch out: Moncada is graduating from high school this spring, and she has some pretty specific ideas for who she wants to see Elsa fall in love with. Sounds like somebody is ready for a screenwriting job.

“I think a creation of a fire princess would be super creative and cool!” Moncada said.