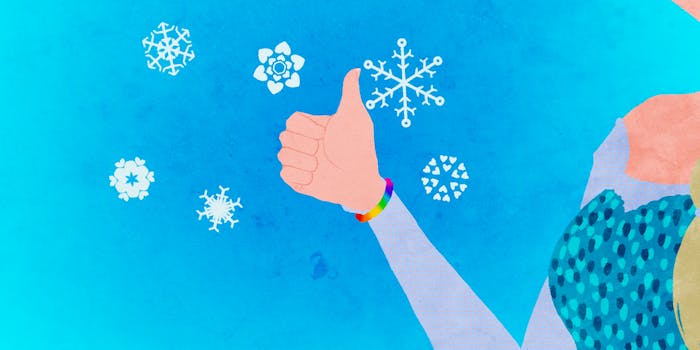 Idina Menzel publicly gets behind #GiveElsaAGirlfriend

The voice of Elsa has thrown her support behind the online campaign to make the Frozen lead Disney’s first LGBT princess.

At a Sunday red carpet appearance for the Billboard Music Awards, Idina Menzel told Entertainment Tonight that she’s all for the push to #GiveElsaAGirlfriend, which the Daily Dot first covered earlier this month, when bisexual high school student Alexis Isabel Moncada launched the hashtag.

“I think it’s great,” Menzel said. “Disney’s just gotta contend with that. I’ll let them figure that out.”

WHEN THE VOICE OF ELSA APPROVES OF YOUR GIVE ELSA A GIRLFRIEND MOVEMENT!!!!!! https://t.co/EGlI5ZhPyO

Since the 17-year-old blogger (who runs the site Feminist Culture) suggested that Elsa become the first queer Disney princess, a petition was also created, which has garnered over 7,000 signatures.

The campaign was so high-profile, a conservative backlash ensued. On the conservative “clearinghouse” website ActRight.com, a second petition calls for Disney not to give Elsa a girlfriend—stating that signatories “don’t want our children’s stories promoting homosexuality.”

Disney confirmed in March 2015 that a Frozen sequel was in the works. So far, the studio has not offered an official statement on the movement to #GiveElsaAGirlfriend.

In a May 2 interview with the Daily Dot, Moncada said she was stunned by the size of the movement, which began with just a few of her own tweets.

“I really didn’t think it would ever get this popular,” said Moncada. “It’s amazing to see so many people want LGBT representation.”