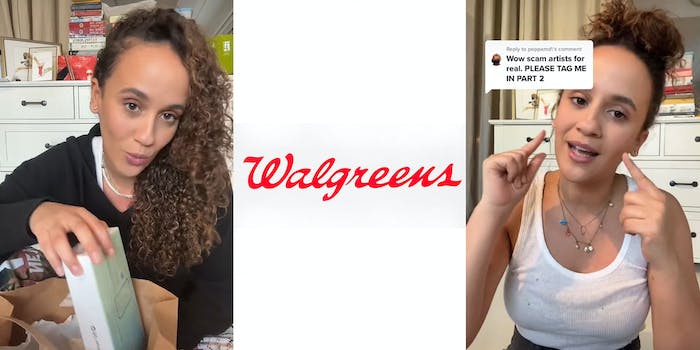 ‘Scam artists for real’: TikToker says Walgreens gave her ‘free’ COVID tests that were actually billed to her insurance

'My pharmacy did the same thing.'

A TikToker has gone viral after claiming that Walgreens fraudulently billed her insurance after offering her “free” COVID tests. The series was broken up into three parts, with each part offering further details about the story and Walgreens’purported reaction.

The first video was posted on April 6, and has garnered over 1 million views.

To summarize the events, Rachel (@rachelbrownmusic) was refilling a prescription at Walgreens when she was offered free COVID tests. She accepted the tests, only to grow suspicious of them when she got home and realized there were eight tests.

According to the U.S. Government’s Centers for Medicare and Medicaid Services, health insurance plans “must cover 8 individual at-home over-the-counter COVID-19 tests per person enrolled in the plan per month.”

Suspecting that these tests were not actually free and that Walgreens had instead charged her insurance, she contacted her insurer. Her insurer informed her that yes, in fact, Walgreens had billed them for all eight tests.

While Rachel did not have to pay for these tests directly, she explained that the practice was deceitful and could cause problems for her and other unsuspecting recipients in the future.

For example, Rachel says she wanted to travel later that month. After Walgreens billed her for eight tests, she would now have to pay for any additional tests out of pocket, as the tests she was given did not work for travel.

Rachel was eventually able to return her unneeded tests and get them removed from her insurance. Additionally, Walgreens reached out to her and asked for store details and her contact information, which she provided them.

After this, Rachel claims she received a call from the manager of her Walgreens, who was “extremely apologetic.” She also claims the manager noted this was “not company policy.”

While Rachel says she appreciated the call, she still filed a fraud complaint with her insurance, as she said the situation “didn’t feel right.”

COVID testing and vaccines have been a big moneymaker for Walgreens. In January of this year, Axios reported that Walgreens’ “sales in health and wellness products in the most recent quarter were up 25% year over year, stemming almost entirely from people buying rapid tests.”

But practices like this bring Walgreens’ profits into question for customers. If this practice is widespread, as Rachel and other commenters theorize, it is unclear how many of the tests Walgreens customers received were received under the understanding that their insurance was paying for them, or how many were received thinking they were entirely free.

Other commenters said they too have been the recipient of ‘free’ tests.

“My pharmacy did the same thiiiiiing!! but they said my insurance randomly selected me to receive them,” claimed a user.

“I got ‘free’ covid tests at Walgreens with my prescription like 2 weeks ago,” added another.

Last month, the ability of uninsured Americans to access COVID-related resources (estimated to be just under 10% of the country’s population) was significantly reduced after Congress failed to allocate more money to the program. Comparatively, countries like Austria offer free tests to anyone living or working there. Germany has offered free tests for almost a year, and numerous other countries offer rapid tests for free or under $6 in pharmacies.