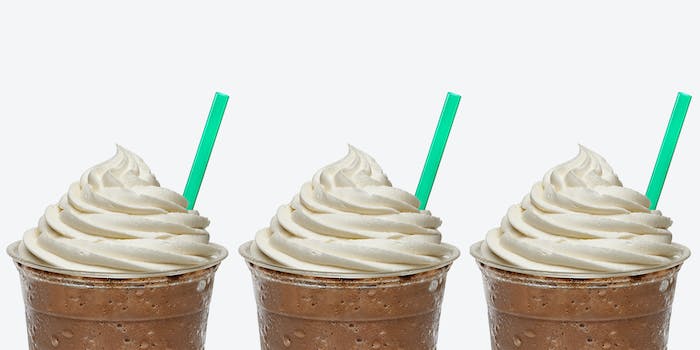 'People don't realize how many customers try throwing their drinks through the window.'

Model and TikToker @ashlyizzle, who seems to go by Ashly, recounted the time a customer threw a Frappucino at her because there wasn’t a cherry on top when she worked the Starbucks drive-thru as a teen.

The video amassed over 5.5 million views and 1.2 million likes since being posted on Oct. 5.

Ashly responded to fellow TikToker @sam_d0ll’s question: “What’s the most disrespectful thing that’s happened to you in the service industry?”

In her portion of the stitch, Ashly, who is now a model and college graduate, talks about how she worked early-morning shifts at Starbucks to pay for extracurricular activities in high school. She says she was working the drive-thru counter by herself at 5am when a woman pulled up and ordered a Frappucino.

She says the customer then asked her to put a cherry on top of the Frappuccino. When Ashly informed the woman that Starbucks doesn’t have any maraschino cherries, the woman gets extremely angry, she continues.

“She’s like, ‘I’ve been to multiple Starbucks and they always put a cherry on top of my Frappuccino, this has never been an issue,'” Ashly recalls the woman saying.

According to Ashly, the customer then told the young worker that she was going to pull up to the window to resolve the issue and continued to berate Ashly face-to-face at the window. Ashly said her manager came over and informed the customer, once again, that the location doesn’t offer cherries.

“I tried to continue the conversation and diffuse her anger,” Ashly says.

“I hand her the coffee before she pays… and she looks at me and says, ‘You’re lucky you’re semi-pretty, because you obviously don’t have a brain,’ and throws the Frappuccino through the fucking window,” Ashly recalls.

Most of the 5,879 commenters empathized with her experience and expressed frustration at how young service industry workers are treated.

“People don’t realize how many customers try throwing their drinks through the window,” @cannonsummers said.

“The way GROWN WOMEN treat teenagers in the service industry baffles me,” another user, @autumnnnrags, wrote.

The Daily Dot reached out to @ashlyizzle for comment.