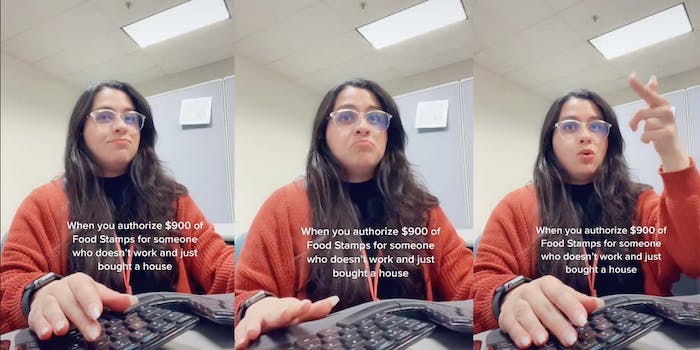 ‘When you authorize $900 of food stamps to someone who doesn’t work’: Viral TikTok sparks debate about government welfare

In a TikTok posted on Friday, TikToker Lilly Ramirez (@lillyy_ram) says she authorized food stamps for “someone who doesn’t work and just bought a house.” In the video, she gives the camera the side eye and used a TikTok sound that states, “It must be nice. I’m tryin’ to get like you, my boy.”

Ramirez included the hashtag #EligibilityWorker in the TikTok’s caption, implying that she works to approve whether or not people receive federal or state benefits, such as insurance, social security, assistance programs, and food stamps. Her clip has received more than 117,000 views as of Saturday.

Many of the comments on Ramirez’s video express disapproval for those on food stamps.

“That’s the problem with this country unfortunately,” wrote @dio_214, the top comment on Ramirez’s video.

“[Government] help should be temporary,” commented @ibeth_lbc89. “3-4 years max, that’s enough time to get get back on your feet if you’re really struggling.”

“The amount of people who finesse the system is crazy,” commented @itsthatseazon.

Ramirez responded to a handful of comments on the video offering her perspective on different situations wherein someone was approved for food stamps that other users offered up in the comments section.

According to the U.S. Department of Agriculture’s Food and Nutrition Service, a family of four is able to receive almost $900 dollars in food stamps per month, at maximum. When it comes to working on food stamps, “special groups” are eligible to be exempt from the Supplemental Nutrition Assistance Program’s (SNAP) work requirements, like children, seniors, pregnant people, and “people who are exempt for physical or mental health reasons.”

There are also entirely different eligibility rules for elderly or disabled SNAP recipients.

Comments on Ramirez’s video also referenced the complexities of how someone might be eligible to receive food stamps while not working and having just bought a house.

“We the [people] need help,” commented @xoxoxoklaney. “The struggle is real. We all need shelter&food.”

Ramirez also commented stating that the house in question may have been a gift to the food stamp recipient.

According to another viral TikTok about food stamps, sometimes recipients aren’t aware of just how much they have received in SNAP benefits. TikToker @cam_kamera was able to buy food for the holiday season thanks to her food stamp card.

The Daily Dot has reached out to Ramirez.