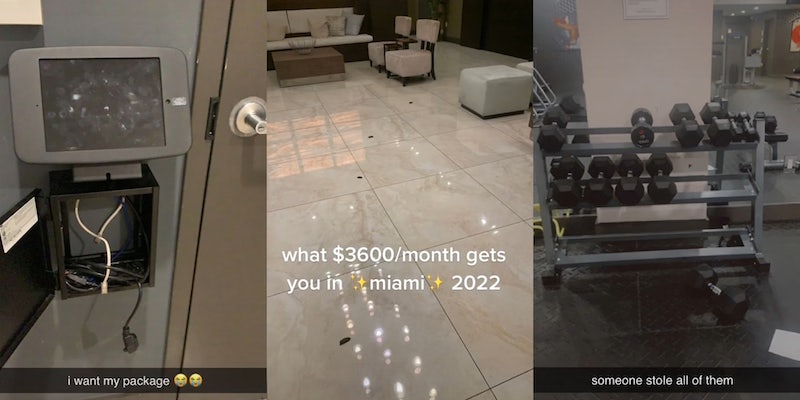 ‘What $3600/month gets you in Miami’: Tenant puts apartment on blast after it raises rent by over $1K

'I would simply move out.'

A renter in Miami is putting her apartment complex on blast by showcasing the many problems with her building. Despite these issues, the TikToker says her landlord raised the rent by $1,500 upon the renewal of her contract.

User Hanna (@hanna_gracie_) posted the TikTok earlier in the month, later offering further updates on the situation in the comments section.

In the video, numerous problems can be seen with the building and Hanna’s apartment, including cockroaches, apparent blood on the floor, alarms going off in the middle of the night, and graffiti.

“They really thought they could raise the rent on this place by $1500??” the caption questions.

According to a sign in the video, the building is District West Gables, which is located in West Miami. According to Hanna, the location was the main aspect that drew her and her roommate to the building.

“We signed here bc it was close to our jobs,” she explained in comments section. “I split rent with a roommate. When I moved in, rent was around $2100-2200. They raised upon renewal.”

In Florida, there are no restrictions on how much a landlord can raise rents after a lease term, per the Lopez Law Group. However, in Miami-Dade county, where Hanna resides, a landlord must give at least two months’ notice before a rent increase of more than 5% as of March 25, 2022.

As for the building’s myriad issues, Hanna noted in comments that the property managers “do a wonderful job of hiding all of this during the tours.”

At first, some commenters simply told Hanna to find a new apartment.

“I would simply move out,” one user wrote.

“You need to move,” a third echoed.

Some had specific complaints about District West Gables.

“District is the worst. Moved out in September and still haven’t gotten my security deposit,” claimed a user.

“Lmao it’s funny cause everything you showed I saw,” another added. “I live at district west too.”

But for many, this was yet another marker of a growing problem in the city: people being priced out of buildings while not seeing a return on those high prices.

“Everyone who is saying move. This is the reality here now. People are being priced out of homes,” a commenter explained. “I’ve had numerous friends leave the state altogether.”

“…These selfish landlords/developers are hiking up prices on places that are not worth it. Driving locals out,” another said.

The Daily Dot reached out to Hanna via TikTok comment and to District West Gables via Facebook message.