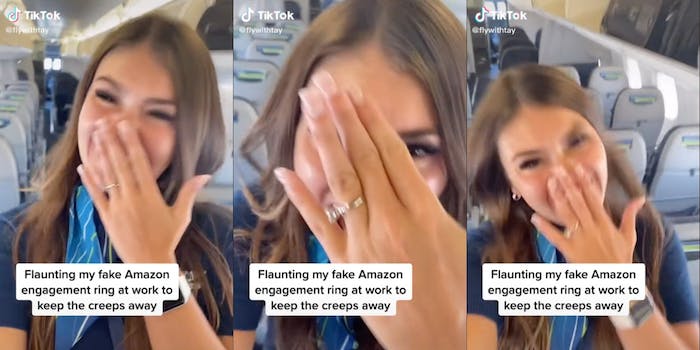 'It's so sad men respect other men/a ring more than just leaving us alone naturally.'

A viral TikTok video shows a flight attendant showing off a fake engagement ring she uses to “keep the creeps away.”

The brief video, while funny, is also an indictment on the tenuous safety of women and what they must do to create space and protect themselves from unwanted gazes and advances.

@flywithtay, a 22-year-old flight attendant named Taylor, posted the video to TikTok with the caption: “Works like a charm.” The video has been viewed over 1.3 million times.

She even posted the Amazon link to where she got the fake engagement ring. The comments section was packed full of women with similar stories and their reasoning for wearing the fake jewelry. However, many of them don’t believe the rings, real or fake, work as well as they’d hoped.

One said, “It’s so sad men respect other men/a ring more than just leaving us alone naturally or not getting aggressive when we turn them down.”

Another flight attendant commented, “I have the same job as you and I do the same LOL. Doesn’t always work.”

“That doesn’t keep the creep away normally, ” said a third commenter. “The creeps don’t care about wedding rings.”

TikToker @flywithtay noted in the comments section that the video was made in “good spirits.” “I’m just a girl trying to avoid an awkward situation. I keep my work and love life separate,” she said.

The Daily Dot has reached out to @flywithtay.