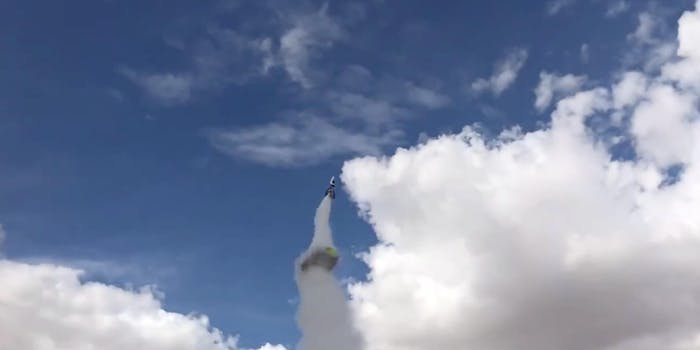 His rep says the flat Earth conspiracy was a publicity stunt.

A flat-earth conspiracy theorist has died in a homemade rocket he bought parts for on Craigslist, and his death was captured in a video.

“Mad” Mike Hughes died on Saturday after launching himself on the steam-powered rocket that he had hoped would take him 5,000 feet high, according to Buzzfeed News.

Journalist Justin Chapman shared the video of the incident in a tweet on Saturday.

The clip shows the rocket launching from the middle of vast open land, far from the camera.

Within seconds of the launch, amid massive smoke billowing, a parachute is seen falling, but no person is attached.

Within a few more seconds, after the smoke disperses, Hughes free-falls while people around are heard screaming. He then hits the ground.

Hughes, a former limo driver who in 2002 was awarded a Guinness World Record for the “longest limousine ramp jump,” spoke openly about believing the earth is flat.

In 2019, he told Fox Business News that he did not “ever believe in science” (or Twitter) and that he believed the Earth is “frisbee-shaped.”

His public relations representative, however, told BuzzFeed that he used flat earth rhetoric “as a PR stunt.”

“He was a true daredevil decades before the latest round of rocket missions,” the representative said. “Flat Earth allowed us to get so much publicity that we kept going! I know he didn’t believe in flat Earth, and it was a schtick.”

Hughes wanted to use his rocket to reach about 32,7360 feet above earth’s surface, reportedly to hit the point between earth’s atmosphere and outer space, an “imaginary line” about 62 miles from earth’s surface.

His past attempts had failed. In 2018, he reached about 1,900 feet, according to BuzzFeed. Another attempt to reach 5,000 feet failed after a water heater he bought on Craigslist turned out to be defective, according to Space.com.