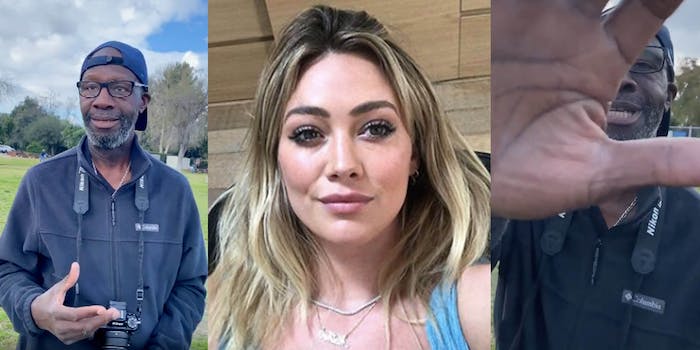 He kept insisting she was the one making it creepy.

A lot of celebrities acknowledge that paparazzi are part of the life they signed up for, no matter how much they dislike it and how much they feel that the laws should change to provide for more personal privacy. But there’s one thing almost all of them tend to agree on–leave their kids alone.

Hilary Duff took that sentiment to heart this weekend when she confronted a man taking photos of her 7-year-old and his friends playing football in the park.

In a video Duff shared to Instagram, she can be seen walking across the field to approach the man. She’s very polite to start out, seeming to give the man the benefit of the doubt.

“Excuse me, who are you here with?” she asks, prompting him to put down his Nikon camera.

Duff immediately confirms with him that he doesn’t know anyone on the team and asks him to stop taking pictures of the players.

“Well you shouldn’t feel uncomfortable,” comes his reply. “You want me to show you ID?”

“I’m not asking for your ID. I’m asking you to stop taking pictures of our 7-year-old children if you don’t know anyone that’s here.”

The man smirks, and continues to repeat that he’s not doing anything against the law before claiming that he’s “practicing photography.”

“I’m not here to scare you or anything like that. Your paranoia is unwarranted, that’s what I’m telling you,” says the grown man lurking in a park to photograph children.

“They’re our children, and we would like to protect them. So if you could take pictures and practice your photography somewhere else,” she says.

He keeps hitting back at Duff with excuses until she finally loses her patience and says that she’ll be sharing the video to her 15 million followers on Instagram to “let people know how creepy it is that this is what you’re choosing to do on your Saturday morning.”

Duff is clearly backing away while she says this, but the man moves closer and closer to her, demanding: “Creepy to who? Creepy to who?”

“No, you’re making it creepy,” he claims, putting his hand over her camera before the video ends, proving that at least he understands the concept of not wanting to be on camera without consent.

Obviously, the Lizzie McGuire star did end up posting the video, calling the man paparazzi and adding: “Go ‘practice’ your photography on ADULTS! Creep! Laws need to change! This is stalking minors! Disgusting!”

Unsurprisingly, others agreed with Duff’s outrage and frustration over the legality of adults making money essentially stalking children just because they happen to be born to famous parents.

“THIS IS INFURIATING,” wrote Busy Philipps. “This isn’t about his job or his ‘rights.’ This is about his OWN perceived POWER over others. I imagine it’s the only time this pathetic person feels any power in his life. I know it’s illegal for an adult not with a child to be inside a playground- how is taking pictures of children without parental consent legal?!??”

Celebrity gossip blogger Perez Hilton chimed in to remind people that he refuses to run pap photos of celebrity children on his site: “Every media outlet should agree to do the same.”

“I like the part where he tries to blame it on your ‘paranoia’ when he is literally standing there with a camera taking pictures of 7 year old kids,” added Tank Sinatra.

It isn’t the first time Duff has used her Instagram to call out people who were bothering her. Back in 2018, she posted an epic series of Instagram Stories calling out a neighbor for everything, from smoking so much Duff’s own apartment “reeked” to violently breaking furniture throughout the night.

But pushing back against creepy photographers taking hordes of photos of children is a whole other level. Maybe if enough celebrity parents confront them, something will actually change–though it absolutely never should have had to come to this.