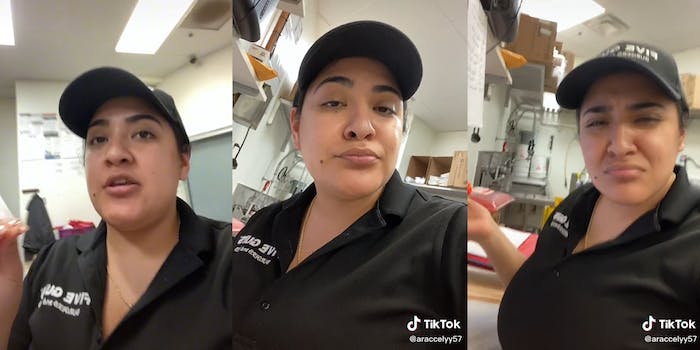 'You trippin' over a soda.'

In the video, the creator @aracelyy57, says that she works at a Five Guys in a mall. She says a group of teens brought their bikes in, which there isn’t space for in the location. She says she asked the teens to wait outside with their bikes. One of the teens, she says, ordered food but no drink. She says that one by one, all of them came in, asking for a cup of water. But rather than filling their cup up with water, she says, they got soda.

@aracelyy57 says she told the group to not use the water cups for soda and to purchase a soda cup if they wanted soda. She says one of the teens gave her an attitude when she confronted him again about it. She says he taunted her about drinking the soda out of the water cup.

Later in the week, she says the same teen came in again and did the same thing—ordered a burger and fries and got a water cup but filled it with soda. The TikToker says that she sternly told the teen he’s not allowed to drink soda out of a water cup and that he mumbled under his breath that he was going to get someone to “beat her a**.” She says she called him “petty” for suggesting that that was the answer to this.

She ends the video by saying that he, in turn, called her “petty” for giving him grief about a water cup, but she says she has to because she has to worry about her “food costs.”

Many viewers in the comments section of the video felt that the creator wasn’t making the points she thought she was. “Babes it’s a SODA, I promise the company will survive the cost of soda in a tiny water cup,” one person commented.

“you thought we was gonna be on ur side…” another commenter wrote.

Some, on the other hand, defended the worker, giving her suggestions as to how to handle the situation.

“Next time he comes in, charge him a soda too even he did not order one he just ask for a water cup,” one suggested.

@aracelyy57 posted a follow-up video, defending herself. In it, she tells critical viewers to “come and work this job, work 11 hours because you don’t have anybody.” She says that this happened twice and that it wasn’t just the one kid, it was everyone he was with. She says that it was “about 10 kids, coming in three times a day, so, yeah, it adds up.”

The Daily Dot reached out to the creator via TikTok comment and Five Guys via a press email.