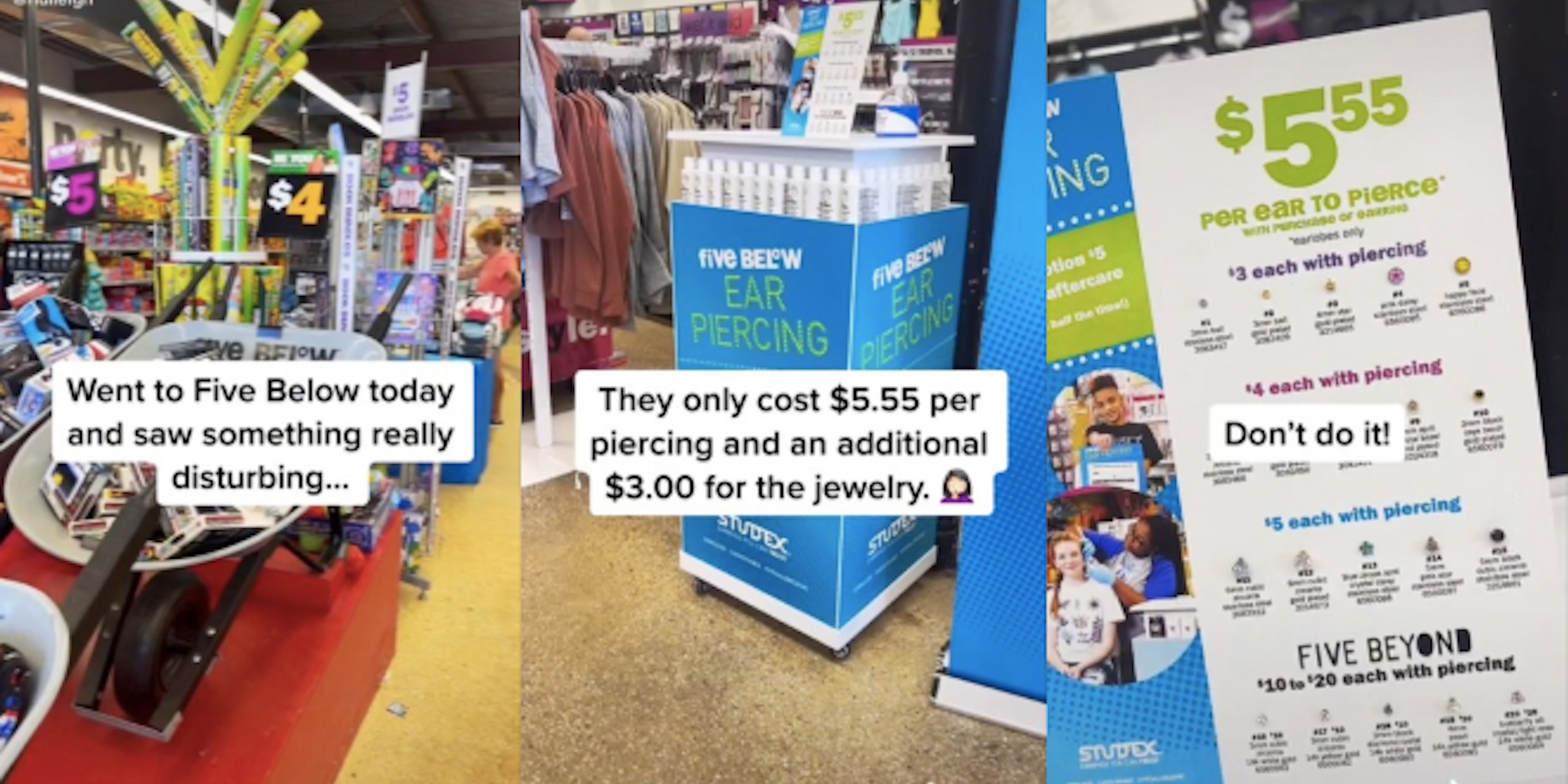 ‘I work at Five Below and I absolutely hate this. I don’t feel comfortable doing it’: Five Below gets $5 piercing station, sparking debate

'[Save] yourself the time and the uneven piercing/ go to a professional body piercer!'

Discount chain Five Below is receiving backlash after piercing stations began popping up in its stores. According to the advertisements, one can get their ear pierced for just $5.55.

Much of the discussion has occurred on TikTok, where a video showing one of the stores’ piercing stations has garnered over 2.1 million views.

@nulleigh Safe yourself the time and the uneven piercing/ go to a professional body piercer! I went through this type of piercing as a child and wish I could fix mine. LOVE Five Below SO much- but I don’t love this. #fivebelow #fivebelowfinds #earpiercing #piercing #bodypiercing #scary #piercinggonewrong #fyp #foryou #dontdoit #no ♬ Oh No – Kreepa

“[Save] yourself the time and the uneven piercing/ go to a professional body piercer! I went through this type of piercing as a child and wish I could fix mine,” poster Victoria (@nulleigh) wrote in the caption. “LOVE Five Below SO much- but I don’t love this.”

Five Below is not alone in offering piercing. While Claire’s has been piercing ears for decades, other stores are now hopping onto the bandwagon, wrote Kaarin Vembar for Retail Dive.

“Five Below joins a number of other large retailers that are also offering the service,” Vembar explained. “CVS began ‘pro-level piercing’ services through a partnership with piercing manufacturer Studex following a successful pilot program with four stores in 2018. By 2019, the retailer began expanding, and ear piercing can now be found at 400 locations.”

Target also appears to be rolling out in-store piercings, though it distinguishes itself by being “the first and only national retainer to offer piercings performed by a licensed nurse,” partnering with ear piercing company Rowan to better serve customers.

As far as Five Below is concerned, though the store’s official page on the topic does not mention Studex, the branding visible in the video appears to reference the company. The website states that the specialists are trained but does not lay out the specifics of the training or who performed it. Finally, it also claims that Five Below’s piercings are “100% sterilized and hypoallergenic” and “FDA compliant.”

Users on TikTok are skeptical, citing their own negative piercing experiences at similar stores.

“I got mine pierced at Claire’s as a kid and they’re so uneven I can only imagine what this’ll be like,” one commenter wrote.

People claiming to be employees of Five Below also made their thoughts known in the comments, saying that they were not a fan of the new service.

“I’m a manager at five below! No one isn’t happy about this,” a user alleged. “They are bringing it to the stores whether we like it or not.”

“I work at five below and I absolutely hate this,” another echoed. “I don’t feel comfortable doing it and we just had a 10 month old come in last month…”

Instead, users recommended that those seeking piercings go to tattoo and piercing shops. While these piercings may be more expensive (generally between $25 and $50), users insist that the customer will be much more satisfied with the result.

The Daily Dot reached out to Five Below via contact form and Victoria via Instagram direct message.