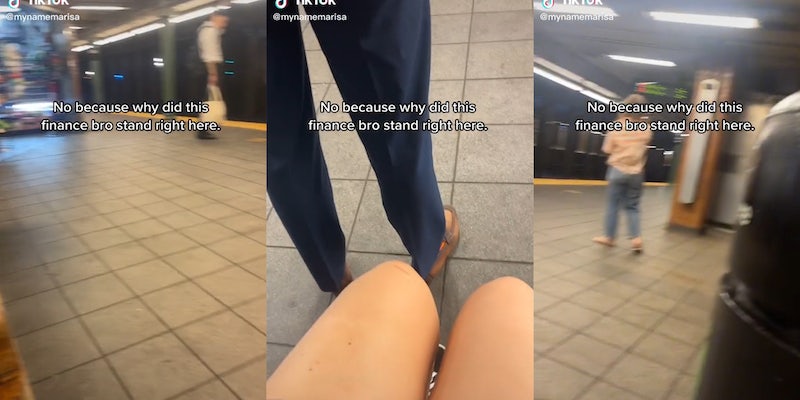 ‘The lack of situational awareness’: Woman films ‘finance bro’ who stands too close to her on an empty subway platform

A woman went viral on TikTok after filming a man standing directly in front of her on a nearly empty subway platform.

In the nine-second clip, user Marisa (@mynamemarisa) is sitting on a bench as she records an empty subway station in New York City. Right in front of her by a couple of inches stands a man wearing dark blue slacks.

“No because why did this finance bro stand right here,” Marisa wrote in the text overlay. She taps her foot twice in the clip to show just how close he is standing to her.

The video has been viewed over 817,000 times since it was posted on Aug. 4. Viewers joked about what the man could’ve been doing in the comments.

“He’s probably farting to mark his scent and show dominance,” one user joked.

“He’s protecting you,” a second wrote.

“He wanted you to notice he was in finance,” a third teased.

Other users offered suggestions for how Marisa could deal with the man.

“I wouldn’t be able to resist yelling ‘HELLO? Could you give me some space??’” one person commented.

“Thats when u start coughing and sneezing,” a second stated.

“Get up and stand right in front of him. He wants to play leapfrog,” a third said.

Several commenters also pointed out the man’s lack of awareness.

“The lack of situational awareness,” one user said.

“People are so not self aware- ugh,” a second agreed.

“Like 50/50 he genuinely didn’t realise you existed,” a third wrote.